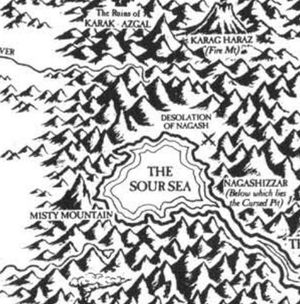 Nagashizzar, the Cursed Pit is one of the mightiest fortress of this world.[1][2][3]

The infamous stronghold of the Great Necromancer can be found within the rock of Cripple Peak on the shores of the Sour Sea, surrounded by the glittering desert of the Desolation of Nagash. [1][2][3]

During the war between the Yaghur who served Nagash and the Forsaken, a great wall of stone was built across the approaches to the Plain of Bones with a citadel at each end. By -1350 IC seven concentric walls and hundreds of towers defended the mountain. [6a]

Around the year -1300 IC the Skaven discovered that a great Warpstone meteor was at the heart of the mountain but also that it was the domain of the Great Necromancer Nagash. Withn its depths, the undead mined without pause, gathering the warpstone for the nercomancer who used it to boost his power and help build his empire. Using tactics that had worked against the Dwarfs, the Grey Lords unleashed thousands of skaven clanrats to invade from below but the undead and their master fought back and the war quickly became a brutal stalemate. [4a]

Around the year -1200 IC, [1b] Nagash offered a pact with the Council of Thirteen, offering warpstone for their aid in certain tasks and for a time an uneasy peace was maintained. When the Council finally discovered his long term plans to envelope the world in the dead, they enacted a desperate plan, equipping a prisoner held by Nagash with the newly forged Fellblade. Nagash was struck down and his body thrown into the warpstone forges and Clan Rikek took possession of the stronghold and its mines for centuries to come. [4a]

In -328 IC, the Necromancer Morath and Neferata led an expedition to the fortress to try and retrieve a Book of Nagash, fighting their way first through Ghoul tribes and then Skaven. [5a]

However Nagash returned around the year 100 IC [1b] and in a single night slaughtered the entire clan, reclaiming Cripple Peak for himself. [4a]

The only living things within this vast fortress are the disciples of Nagash. These madmen worship Nagash as a god and lead his cult until the day he re-emerges from his citadel to conquer the world. Now infused by the power of the Dark Magic that has surged through the world since the last Chaos incursion, Nagash is almost ready to strike back at the world of the living.[1][2][3]

Built by the tireless labour of countless Undead things the castle rose nearly half a mile over the desert. It was excavated from the living rock of Cripple Peak and the mountain top is its highest spire. Hundreds of other great towers bristle from the mountainside. By night, terrible green witchlights bum in their windows.[1][2][3][3]

Nagashizzar is a fortified mountain pierced by countless leagues of corridor. Within thousands of chambers, many hundreds of Undead things wait ready to answer their lord's every command. Vast as this great army is, it is but a tiny fraction of the legions who once served the Great Necromancer. [1][2][3][3]