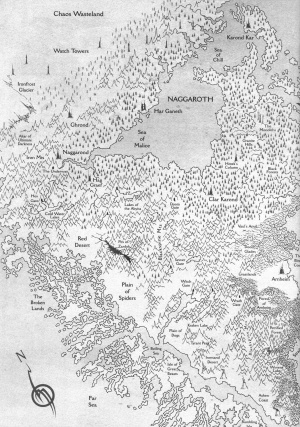 Naggaroth is the cold, bleak land of the Dark Elves. It is located northwest of Ulthuan, across the Great Ocean from the Old World. Naggaroth is bounded to the north by the Chaos Wastes, to the south by Lustria, and to the west by the Far Sea across which lies Cathay.

Running north-south through the continent are the dangerous Black Spine Mountains, where manticores and other beasts make their lairs. The land to the east of the mountains is mostly dark pine forests and swamps, while west is mostly deserts and volcanic land. The northern border is tundra wasteland. The mountains contain many entrances to the Underworld Sea, a vast network of caverns -many flooded- which extend under the continent and even reach as far south as Lustria. The Underworld Sea is inhabited by all manner of subterranean monsters and has only been partially mapped.

Though the Dark Elves lay claim to the entire continent, in truth the majority of them dwell in a handful of cities located in the northeastern corner of the continent, surrounding the sea of Malice and Sea of Chill. This region was settled by the Dark Elves thousands of years ago following their defeat in the Elven civil war, and was established as their realm under Malekith the Witchking. The rest is wilderness patrolled by the Dark Elf rangers known as Shades.

Greenskins and Beastmen also dwell in the wilderness of Naggaroth. Previously, the area was inhabited by primitive humans but these were enslaved when the Dark Elves arrived.

The Dark Elves have also built a series of Watchtowers to guard against incursions of Chaos Warriors, Beastmen and Daemons from the Chaos Wastes to the north.

Huge slave plantations grow food for the six cites. [1a]