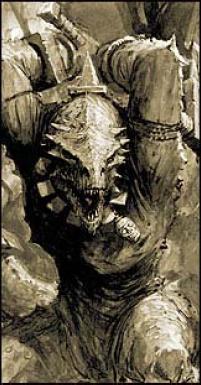 The mysterious Nakai the Wanderer.

Nakai the Wanderer, Sacred Kroxigor of the First Spawning is an albino Kroxigor with unusually thick skin, even for a Kroxigor. [2b]

Many Skink priests believe that he may actually be an avatar of the Old One Quetzl and will one day return to fight for Lustria once again. Others think he is a jungle spirit made manifest. He once fought alongside Tehenhuain and the red-crested Skinks against the Skaven.

After each battle, Skink Priests adorn Nakai with jewellery to celebrate his victory, and he has become quite covered in these objects over time. [2b]

It is thought he was spawned in Tlanxla. [2b]

Early in the Age of Strife, Clan Pestilens arose on Lustria and rampaged through the jungles and temple-cities. One of its weapons was a mighty Rat Ogre, a beast that grew strong on disease and proved unstoppable until it was confronted by Nakai although it came close to overwhelming even the mighty albino. Even in death, it posed a threat, its tainted life blood infecting the Kroxigor as it spattered him in its death throes. It would be many months before the fever broke. [2a]

In the siege of one of the temple cities, Nakai held the daemons by himself until the arrival of reinforcements. He disappeared after the battle and was believed dead, but appeared some 3000 years later and has reappeared numerous times since then, often arriving at a temple-city shortly before it is attacked. [1a]

He appeared at the Defence of Itza [1a] where he wreaked havoc on the forces of Chaos at the Red Fields. [3a]