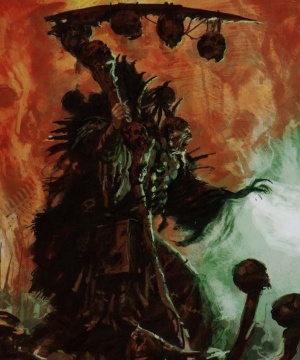 A Necromancer is a wizard able to comunicate with and command the dead, summon spirits and extend his life for centuries. [1a]

Mystery shrouds the study of necromancy. To learn the dark art, an aspirant must find either a Necromancer or Vampire and become his apprentice, or acquire a forbidden book rich in the secrets of undeath, such as one of the fabled Nine Books of Nagash.[3a][4a]

It is usually humans, rather than the longer-lived races, that delve into the study of necromancy. Perhaps because Elves have such vast lifespans, they do not normally feel the need to prolong them by unnatural means. Dwarfs have no aptitude for magic, let alone a desire to defile the honoured dead. Orcs and Goblins have little concept of their own mortality and do not fear death in the way men do whilst Skaven are too caught up in their own scuttling pursuit of the way of the Horned Rat. [3a][4a]

Some are already evil, but others turn to it after they have lost their loved ones, require great power for a cause or simply fear death, sadly the use of such magic invariably leads to insanity and paranoia whilst their bodies became ever more cadaverous. The more adept are able, at least for a time, to shield body and mind from ill-effects by channelling the dark magic through the dead, but eventually the loose their sanity and their bodies become reeking, walking corpses. [1a]

Necromancers often become the servants of vampires, hoping to learn firsthand from the masters of undeath but often find that once they are in the thrall of a vampire, they can never leave their service for vampires are notoriously domineering and loath to let their devoted subjects depart. Even finding a Vampire willing to be a tutor has its obvious difficulties and many of those who have sought apprenticeship with such a creature have ended up serving in a more menial way; as an animated corpse, a light snack, or as raw ingredients for a particularly difficult enchantment. Given the morbid reputation and dreadful habits of Vampires, it is perhaps safer to confine oneself to the study of blasphemous tomes instead.[3a][4a]

Seeking out books of forbidden lore has its own perils - often written in blood and bound with the skin of mortals, they can drive the most strong willed insane. Such dangerous volumes include the infamous Nine Books of Nagash, the Liber Mortis, the Book of the Dead and the Grimoire Necronium. [1b]

Many are copies of older texts from long-forgotten times, and there is no guarantee that any of the rituals found in them are correctly transcribed. Some simply do not work at all, and others may go disastrously wrong, such as when the infamous Jacques de Noirot accidentally animated all of the corpses in the cemeteries of Mousillon and then found he could not control them. Possessed of an insatiable desire for human flesh, the Zombies devoured the hapless Necromancer and rampaged through the city streets. After feeding on hundreds of peasants, merchants and men-at-arms, they were eventually destroyed by the King of Bretonnia's household knights.[3a][4a]

As a man follows the dark path of the Necromancer, he becomes ever more detached from his mortal roots. Morbidly questing after the secrets of death, a Necromancer deeply steeped in the lore of the dead stands on the threshold between worlds, neither wholly alive, nor one of the Undead. His body twisted with unholy power, his mind seared by the horrors he has witnessed, a Necromancer often has more in common with his lurching, moaning minions than with the living he seeks to slay.[3a][4a]

Some Necromancers are able to project themselves into the underworld realm of Morr himself, looking to steal choice souls from the god of the dead. However, not all who dare such an insult to a god escape and imprisoned in his realm for eternity, their mortal body cast into a coma and slowly rotting away. [3b]

Necromancers are armed with a Hand Weapon, although some may wield Double-Handed Weapons such as scythes or Halberds, they may ride monsters or a Nightmare which may have barding.[1c] Powerful Master Necromancers may ride a Zombie Dragon or a Winged Nightmare. [2a] Some ride a Corpse Cart into battle.