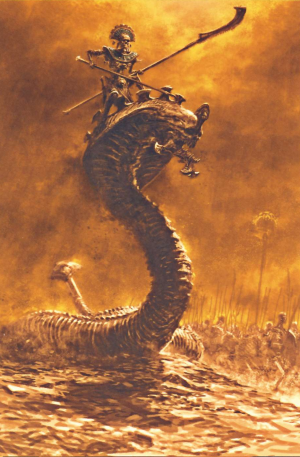 Necropolis Knights are the Tomb Kings version of the mortal heavy cavalry being elite warriors riding atop statues crafted to resemble vast serpents. [2a]

Crafted to guard the entrances of the Mortuary Cult temples, Necroserpents stand at least twice the height of a man. Most take the form of the Khemrian Cobra, although some resemble double headed Blood-Asps or Skull-Vipers. As the cobra they are incarnations of Qu'aph, the god of cobras who preyed on Dragons before humans came to the Great Land. Like the living snakes, the fangs of a Necroserpent drip with poison. [2a]

They can travel beneath the ground at a formidable pace before emerging from the sands to charge into unaware foes. [2a]

At the base of the serpent statue is a hollow alcove where the Necropolis knight rests - once a member of the Tomb Guard, the knight is one whose mind was damaged by warfare and could no longer be relied on in the line of battle. Choosing ritual suicide, the warrior slit their palm to spill blood onto the belly of a Necroserpent and then take venom dripping from its fang into their wound. [2a]

Qu'aph would then judge them and if they were worthy they would be reborn as Necropolis Knights and mummified with their wargear beneath the statue that had taken their life. When awoken to war, the soul of the warrior takes control over both serpent statue and its riders body. [2a]

If the best best a mortal can hope for is a horse overloaded with armour, the Nehekharan finest ride the animated stone snakes. Their heavy tails can literally shatter bone with monstrous swipes, while dipping giant fangs in warm flesh. Even if the wound itself is not lethal, the victim is still ultimately doomed; the statue's head conceals poison sacs, further likening to the real snake. [1]

It is only logical that only the best will get to ride these beasts and the knights have a lot in common with the Tomb Guard, including the life-draining spear in their bony hand.[1]