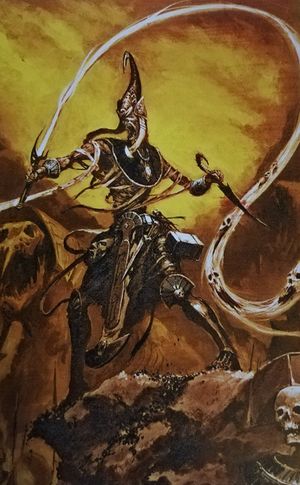 The Kings of Nehekhara were obsessed with death and the afterlife, and commissioned the creation of towering monuments to their glory and labyrinthine pyramids in which their mummified remains could be interred. The Necrotects were responsible for making their kings wishes a reality.[1a]

The Necrotects were artisans and architects of ancient Nehekhara. Each would design many awe inspiring monuments and then oversee their creation. Teams of slaves and workers would toil ceaselessly in the creation of War Statues, Monoliths, Tombs and Pyramids.[1a]

Necrotects were notoriously volatile, and it would take little to raise their ire. It was not uncommon for Necrotects to mete out harsh punishments for even the slightest delay or damage to their work. They would never permit the finer details of a piece to be crafted by 'lesser' hands, and would often spend days carving intricate hieroglyphs and friezes. These were not simply ornamental, as the Necrotects were trained by the Mortuary Cult to ward the tombs and pyramids they crafted against the ravages of time and against malign influence that threatened the safety of the king's body.[1a]

No king wants his monuments shadowed by those of his successors or rivals, and as such the king's Necrotects would be interred within the pyramids of their own creation, to build the king's palaces in the afterlife and so that the secrets of their construction could never be revealed. Many went willingly, drinking of the poisoned cup offered to the Queen and Royal Guard, though some were reluctant and had to be encouraged, or suffer an 'accident' on a work site. Regardless, each were mummified and interred with all the tools of their trade, wearing a death mask, crafted by their own hand.[1a]

With the Tomb Kings marching to war once more, the skill of the Necrotects has been put to a new use. They march alongside the armies of Nehekhara, maintaining and repairing the colossal War statues that they built many centuries ago, ensuring that these deadly creations can continue in their duty to protect their Kings.[1a]