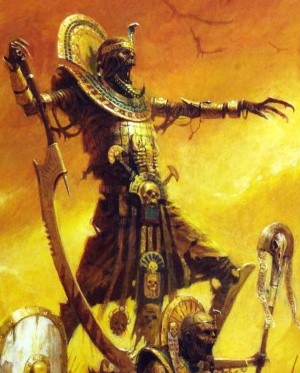 King Nekhesh was the last of the first dynasty of the Kingdom of Khemri.[1]

His rule over Nehekhara was tenuous and there was great strife in the Necropolis. He was also the first to use a weapon known as the Destroyer of Eternities.[1]

Nekhesh marked the end of the first dynasty, and was followed by King Rakaph I, founder of the second dynasty.[1]