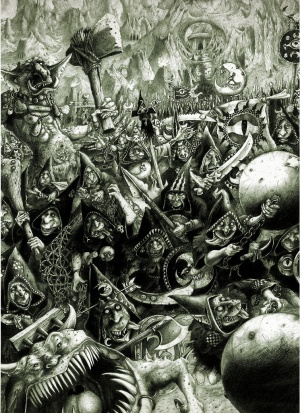 Night Goblins are a Goblin sub-breed who live inside the mountains of the Old World. [1a]

Night Goblins dress predominately in black, and will only come out into the sunlight when they are suitably reinforced by considerable amounts of fungus beer. [1a]

They spend the majority of their time fighting each other, Dwarfs, and/or Skaven, as all three species compete for the same territories. The Night Goblins have had considerable success in their battles with the Dwarfs, having even conquered a portion of Karak Eight Peaks, the most ancient and awe-inspiring Dwarf hold.

The Night Goblins make extensive use of Squigs in battle, being one of the few creatures beneath the World's Edge Mountains whom the goblins can tame (somewhat) effectively. These squigs are either herded towards the enemy, or in the case of the most hard-case gobbos, ridden into battle. [1d]

The Night Goblins are experts in hunting, capturing and slaying Squigs using parts that they do not eat as weapons or clothing. In addition some are kept as dangerous pets and guard dogs. During battles, herds of Squigs are encouraged with firebrands, pitchforks and drums to charge the enemy. [1d]