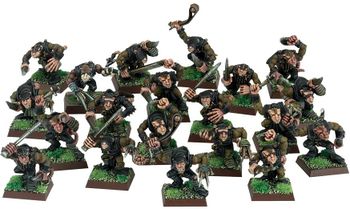 A unit of Night Runners.

Night Runners are the most common warriors of Clan Eshin.

They are trained to move at speed, striking quickly to prepare the way for a larger Skaven army. Common objectives for Night Runners are to seize key terrain, harassing and slowing down enemy troops, picking off war machine crews with slings and luring foes into ambushes.[1]

Casualties are high amongst Night Runners, and only those who survive many engagements can hope to advance to the rank of Gutter Runner. One of the most dangerous missions given to Night Runners is to follow a Warp-Grinder team underneath the enemy and attack them in the flank or rear. Although this is usually a suicide mission, it does provide a good distraction. Night Runners will also be used to draw out enemy reserves so the elite Gutter Runners can strike at an exposed target.[1]

The champion of a unit of Night Runners, the Nightleader, is given many secret tasks for he and his unit to perform. These missions are the final tests before advancing to the next level of training. Only the most skilled are able to advance, and a single mistake can be enough to jeopardise both the Nightleader's career and the lives of the entire unit.[1]