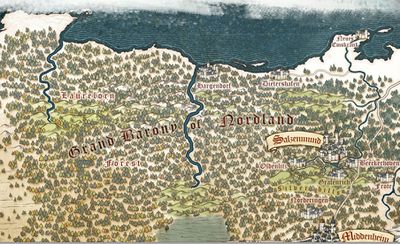 Nordland is a province of the Empire.

Nordland is currently ruled by Middenheim and governed by the Baron Werner Nikse, an relative-by-marriage of the Todbringers. [6]

In law, the length of Nordland's territory extends from the Ostland border, all the way to the edge of the Wastelands, and north from the Great North Road to the shores of the Sea of Claws. [5a]

The Elector Counts of Nordland have accumulated an impressive collection of titles and claims over the millennia, which if enforced, would make them rulers of the entire northern portions of the Empire. Reality has a way of foiling the most grandiose ambitions, however, and the Count's rule extends to barely half of the lands claimed. Two great forests blanket the Nordland coast, leaving humans to exist in pockets carved out of the solid woodlands and along the barren shoreline. [5a]

The eastern section of the Province includes the edge of the Forest of Shadows, which dominates the majority of Ostland. It extends as far inland as the Erengrad-Middenheim road, crossing north of Beeckerhoven and finally ending on a banks of the River Salz. The Forest of Shadows has a dark and dreaded reputation in Ostland, and that reputation has carried over to the people of Nordland. Predatory giant spiders are known to lurk deep in the forest, while Beastmen and Chaos mutants have been seen in increasing numbers since the great war had begun. Lumbering parties rarely travel far into the woods anymore, unless accompanied by a regiment of armed soldiers. The increase danger has led to a fall in timber harvest, hurting the local economy and leading to whispers that the Count is not doing his job.[5a]

West of Salzenmund and the Silver Hills lies the Laurelorn Forest, which stretches west to the borders with the Wasteland. Technically a part of the Count's domain, the Laurelorn is in truth a wholly independent realm. Its rulers are the reclusive Wood Elves of Laurelorn, the descendants of the High Elves who chose not to leave the Old world at the end of the War of Vengeance. By agreement with the Elector Count of Nordland, the Elves allowed Imperials to settle the area between the Rivers Salz and Demst, which enters the Sea of Claws at Hargendorf. The Agreement strictly limits numbers, however, and the Elves must approve before any new settlements are made. This they have been loath to do, placing restrictions on what the settlements may harvest from the forest. [5a]

The humans chafe under these restrictions, and the nobles have pressured Grand Baron Theodric Gausser to demand re-negotiations. Impatient as ever, some Humans have made illegal settlements in the area, which the elves have threatened to remove by force, if need be. Some observers fear a coming clash between the Elector Count's knights and the warriors of Laurelorn, but the recent war has tied Salzenmund's hands, and forced both parties to stand down until after the greater threat has been resolved. There are still worries, however, that the elves might see this as a time to assert their rights upon the Imperials whilst they are at their weakest.[5a]

Beyond the River Demst is the core of Laurelorn, a place Nordlanders call "The Witches Woods" out of their superstitious fear of the Elf Queen. No Imperials, up to and including the Elector Counts, may cross into it, under penalty of death. What lies within the Witches Woods is unknown: some have speculated that the Elves have no capital, living in nomadic life under the trees, whilst others believe it to be the home of the Elf Queen herself. Old books, on the other hand, mention a nameless city of glass deep in its heart, a place that glows with its own light. Whatever the truth, it is certain that nether creatures of Chaos nor Greenskins raider last long once they enter the Forest, for the elves defend their home savagely against all comers.[5a]

The Coast of Nordland is an often desolate place, where a hardy people eke out a living from the sea. The whole coast is frequently blanketed by thick fogs and lashed by storms in fall and winter. This has made the Nordland coast a tough home for the Imperial Fleet, but since Marienburg seceded from the Empire the Ocean fleet has had no choice but to base itself here. The Fleet's primary anchorage is in the growing Town of Dietershafen, which uses the provinces ample timber supply in a burgeoning shipbulding program to combat the Sea Raiders from the north.[5a]

From the westermost settlements at Hargendorf east to Neues Emskrank, the shore comprises Sandy lowlands often interrupted by marsh and bog. West towards Norden, the shores become more rock and covered by shingle as it rises to the coast of hills and Ostland. Here on the Drosselspule Bay, fishermen harvest vast numbers of herring and cod, most of which is salted and exported south. Wreckers are still common along the Nordland coast, as some people supplement their meagre incomes with the pickings of ships they have led to their deaths.[5a]

The Was Jutone tribe were the main human occupants of the area before their incorporation into the Empire but were dominated by the powerful Eonir kingdom of Laurelorn Forest. [7a]

The various petty kindgoms finally united under Wilhelm 'Bullshanks, second son of the Graf of Middenland. [7a]

Nordland joined the Empire in 767 IC, after several centuries remaining on the edge of Sigmar’s domains eventually becomming a a province in its own right. Although weaker than the wealthier southern regions it remained significant enough to gain and hold Electoral status, even producing an Emperor, the universally-loathed Hjalmar the Tyrannical. [6]

In 2502 IC, Baron Werner Nikse married his daughter Anike-Elise to Graf Boris Todbringer and backed him in his attempt to become Emperor. In contrast, Theodoric Gausser the Nordmarshall backed Karl-Franz in exchange for support against the Norse raiders. [7a]

This support was forthcoming and a great host was brought north by the new Emperor, defeating a Skaeling army at the Battle of Nordland Fjord. [7a]

In 2015 IC Count Ostrein of Nordland fought against the armies of Middenheim at the Battle of Elstwater Keep and his hourglass emblem is still used by separatists. [6]