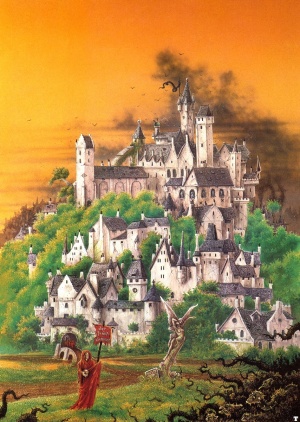 A painting of Nuln.

Nuln is a city-state, the second largest city of the Empire in the Old World. [2a]

Having temporarily replaced Altdorf as the Imperial capital during the reign of Magnus the Pious, it retains its prominence.

Situated at the junction of four provinces - Reikland, Wissenland, Averland and Stirland - and two great rivers, the Reik and the Aver, Nuln is a major trading centre: goods enter the city from the north and the south, from Wissenland, the dwarf holds in the mountains and especially from Tilea.

Nuln is also the base of one of the two Arch-Lectors of the Cult of Sigmar. The temple to Sigmar is large and ornate, and attracts thousands of pilgrims due to its connections with Magnus the Pious. The second most important temple in Nuln is that of Verena.

Though it is a spiritual centre, it is also a technological centre. The city is home to the Imperial Gunnery School where most of The Empire's cannons are forged[6a], and Nuln is one of the Empire's greatest factories for black powder weapons. The Gunnery School takes in the metal ores from the hills and transforms them into precision weaponry such as handguns, pistols and cannons. They then sell them off to other provinces for a hefty profit. The school also trains the finest artillery crews. Many expatriate Dwarfs work in the school and work to create new weapon designs.

As a natural consequence of the creation of black powder weapons en-mass, the armies of Nuln use many of these weapons themselves. They are also famous for using the pike and half-pike heavily.

It also has some of the oldest and most esteemed universities in The Empire.[2a] They may even surpass Altdorf in this regard, although it is hard to tell. As a result of its proximity to the mountains, it has also been the target of Orc invasions for centuries.

The city banner has a golden lion holding the scale of Verena, goddess of learning and a blindfolded maiden is often seen on the regimental flags as well as the famous bridge of Nuln, cannons and lions. [6a]

In the very early Empire, sometime before the 4th century IC, Emperor Fulk moved the capital to Nuln. [4a]

Nuln was once a renowned university city, the city's first colleges having been established by the Empress Agnetha. The city's reputation still draws students from far and wide.

Nuln served for a time as the Imperial capital, until a century ago, when Altdorf was restored as the Empire's traditional capital. It was from Nuln during the darkest periods of the Empire that Magnus the Pious issued his first great rallying calls for unity against the forces of Chaos, whose growing power threatened to finally overcome the disintegrating Empire.

Emperor Dieter IV spent a fortune ehancing the appearance of Nuln creating a Palace of Gold, many great ornate buildings and fountains however when word came that Grom the Paunch was fighting the armies of Karak Varn, Dieter and the Imperial Court retreated to Altdorf, refusing the calls for aid from the Dwarfs. Several years later Nuln itself was attacked and after a seige, brutally sacked before the Goblin horde moved on. [3a]

In 2499 IC, a huge number of Skaven boiled up out of the sewers and attacked the city, nearly capturing Countess Emmanuelle and destroying large areas. [5a]

The great horde of Tamurkhan emerged from Winters Teeth Pass in the Black Mountains in 2510 IC, their target being the home of Magnus the Pious. The city of Pfeildorf was overwhelmed despite the Margrave amassing his forces to defend it and the horde continued to advance towards Nuln. Countess Emmanuelle and her war council received advice from Elspeth von Draken as well Lietpold the Black whose Border princedom had been crushed by the invaders. As panic spread through the city, a brutal crackdown was imposed with lawbreakers quickly inducted into the growing milita. [1a]

Countess Emmanuelle, a shrewd, iron willed ruler rather than a frontline general used the vast riches she had access to employ mercenary companies, battle wizards and even half-dozen land ships being built for Marienburg. On more than one occassion, she was heard to recit the proverb: Wars are waged by warriors. but won with gold. Sedition was quickly dealt with, her headsman and champion monting a dozen formerly infulential heads on spikes. [1b]

The great army of the city prepared to meet the horde in battle, deploying substantial forces to meet them initially in the field, before intending to fall back on a series of defensive lines. Soliders, wizards and fanatics of a dozen cults prepared to face the monsters of Nurgle whilst Elspeth von Draken's dragon clung to a high cathedral spire, giving her a perfect vantage point. So began the Battle for Nuln. [1c]

Finally as the battle turned against the forces of Chaos, Theodore Bruckner confronted the leader of the horde as he attempted to enact a last desperate ritual. As the foul champion attmepted to enter his opponents body as he done for many others, the talisman given to Bruckner by Elspeth came to life, consuming both in powerful flash of fire. The ritual failed, the daemons were dispelled and the battle was won. [1f]

In 2515 IC Ostland was invaded by a large force from the far north and requested aid. Although the Emperor was in Bretonnia with much of the army, a coalition was assembled including a relief force from Nuln under Grand Marshal Ludwig Gutman. [9a] The road to Ostland was long and delays had plagued the army until finally Gutman's chief advisor, the Bright Wizard Ludas Luddace reported that large force of cutthroats and bandits was approaching led by the Mad Count of Averland. Ludwig formed his army into battleline protecting the town of Sudenheim. [9b]

The uniform of Nuln is black with different coloured sleeves for varied regiments and gun crews. [6a]