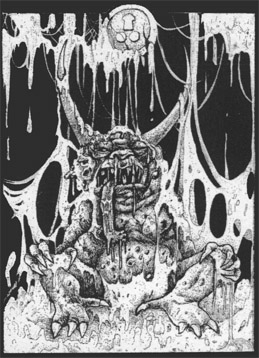 Nurgle the Lord of Decay

Nurgle is one of the Four Great Powers of Chaos. He is titled the Great Lord of Decay and represents pestilence, disease, and physical corruption. Of the four Chaos Gods he is said to be the most attentive and involved with the plight of mortals. Those afflicted by his contagions often turn to him in order to escape their suffering. The physical likeness of Nurgle is described as gigantic and bloated with corruption, with foul-coloured leathery and necrotic skin.

Nurgle is also known by the names Neiglen, Onogal and Nurglitch, derived from his Dark Tongue name of Nurgleth. Human Chaos Marauders call him Lord of Flies or the Plague Crow.

All Chaos Gods are embodiments of the hopes, fears and other emotions and concepts generated by mortals. In Nurgle's case, the source of power is the mortal fear of inevitable death and disease, and their unconscious response to that fear, which is the motivating power that drives the lives of mortals.

Nurgle and his daemons, in contrast to their morbid and putrid appearance, are jovial and friendly in demeanor. Nurgle is often referred to as Grandfather Nurgle, Father Nurgle or Papa Nurgle by his followers because of his paternal nature.

Nurgle's sacred number is seven. His symbol is the tripartite fly - often rendered as three spheres arranged in a triangle.

Nurgle's main enemy is Tzeentch, the Lord of Change, as the two draw their power from opposing sources. Tzeentch is hope and changing fortune, while Nurgle is defiance born of despair and hopelessness.

Humans who are afflicted with illness, plague, grievous injuries or starvation often pledge themselves to the service of Nurgle in their desperation. Followers of Nurgle are still afflicted with disease and pestilence, but instead of killing them, it makes them tougher.