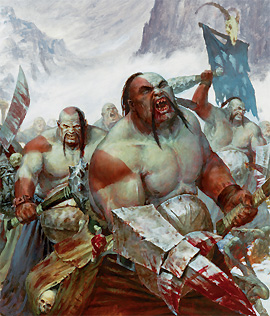 An average adult male Ogre stands over ten feet tall, and is almost half as wide at the gut. Male Ogres are often bald as a boulder, although they are rarely without facial hair, which are thought to be cultivated to capture morsels of food that escape the Ogre's mouth whilst female Ogres usually braid their hair.[5a]

The skin of a Ogre is twice as thick as a leather breastplate [3a] whilst their meat-breath can startle a Dwarf sober! [4a] A healthy Ogre has a large belly, the gut being important physically, socially and spiritually to its owner. The vital organs are situated lower than in humans and proected by thick muscles which can grind with huge force, providing Ogres with formidable digestive ability. Most protect their guts with metal armour - the gut-plate and usually depict an icon significant to the bearers tribe. Few wear much clothing, but richer more powerful ogres do use armour but most use warpaint and are adorned with crude tattoos. [3a]

Most Ogres dwell in the Ogre Kingdoms, the Ogre homeland east of the Dark Lands, in the Mountains of Mourn, together with the Gnoblars, a goblinoid slave-race.

The Ogre Kingdoms are a large collection of dictatorships, each ruled by its own Tyrant. The boundaries of an individual kingdom extend as far as the ruling Tyrant can see, and a Tyrant also typically rules over an Ogre tribe.

The Elves believe that the Old Ones created the ogres but had not completed the process when the polar gates collapsed. [4b]

For many thousands of years, the Ogre tribes lived near the land of Cathay, thriving as they roamed across the vast grass plains. From their human neighbours they learnt to make fire and even basic metalworking at first living in peace with them but soon their population had grown and tribes began to enter Cathay itself, aquiring a taste for the flesh of its people. [4a]

The Celestial Dragon Emperor, unwilling to allow this to continue unleashed a comet to strike them down, wiping out more than two thirds of the Ogres in the impact and subsequent firestorm. The grasslands were destroyed and so were the vast herds that the Ogres relied on and so the survivors began to prey upon each other. Poison clouds blocked the way east so the Ogres headed west. [4a]

It was the prophet Groth Onefinger who led them across the desert to offer sacrfice to a new, hungry god - the Great Maw. Since that day, the Maw has been with the race, deep in the minds and bellies, driving them ever onwards. [4a]

Ogres worship a god they call The Great Maw, a massive, seemingly bottomless pit of hunger in the world lined with rows of fangs. Ogres similarly are voracious creatures which are never sated. Driven by hunger, they will eat anything they get their hands on, including fellow Ogres. Cannibalism is a natural part of the harsh and uncompromising Ogre society, and only adds to the Ogres' terrifying reputation.

Ogre society is based upon one simple principle: that might makes right. The strongest may take whatever they like from the weaker, including life and limb. An Ogre who kills another Ogre in a fight has, in the most effective way, shown himself the stronger, and far from having committed any wrongdoing, has merely demonstrated this principle and proven himself to be in the right.[3b]

All forms of disputes, such as personal grudges, land disputes and leadership challenges, are settled by contests of physical strength - the most serious questions being answered by contests in the form of a lethal bout of pit-fighting. The winner of a challenger is allowed to eat part of the loser - often just an ear or a finger but in the leadership challenges where the opponents fight without gut-plates, the loser is normally devoured then and there. [3b]

Feasting is a major part of the culture, held near fireplaces the size of a stable around a maw-pit - a primitive arena. The room resonates with the sound of hollering, belching and bellowing ogres alongside the constant cruching of bones. The food is normally varied, as Butchers know that the tribe appreciates diversity in their diet. [3b]

Dishes served can range from such offerings as Bretonnian in garlic, Elf legs fried in horse blood to Dwarf sausage in a gromril case - all washed down with beer, sweetened by honey and hornet. [3b]

Ogres have strong nomadic tendencies, some taking long journeys all around the Warhammer world, where they fight in mercenary armies or for any general who will pay them in gold or sometimes even food. Most dangerous is large groups or tribes on the march devouring any who stand in their way, then their livestock and then anything else that looks even vaguely edible. [4a]

All Ogres have a club of some sort. This club is not only a valuable weapon and hunting tool, but also a symbol of status. Only a truly desperate Ogre will eat his club.[3a] A very poor Ogre would have a simple hardwood bough for a club but a Tyrant may wield a brutal looking bludgeon, banded, studded and spiked with iron. Ogres also often pair it with the so-called ironfist, a creation that can be used both as a shield and as a brutal weapon.

The Ogres share their territory with a number of creatures who are almost invariably monstrous and almost as dangerous as the Ogres themselves. Some of these fight along with the Ogre horde: