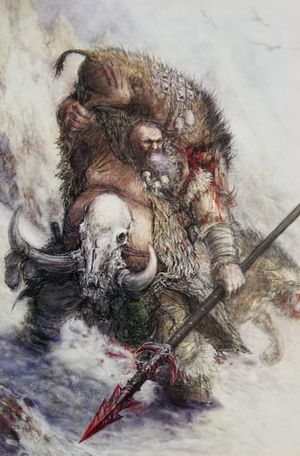 Ogre Hunters are large powerful Ogres who have left their tribe to wander or have been exiled. [3a][4a]

They are the some largest Ogres you might be unfortunate enough to encounter. While the size usually means power and authority in the Ogre society, Hunters are the exception, preferring to live alone high above the Mountains of Mourn, where they track down beasts as large as a Bull Rhinox and Great Mammoth, going to the great distances to find them. Once they encounter them, they will either club it down or use their harpoon crossbow, which can be likened to a personal bolt thrower in power.[1][2][4a]

Hunters are usually covered in tatoos and scars, his body swathed in thick furs and trophies of the beasts he has slain to display his prowess [3a] and ward of the cold of the altitudes in which they hunt. [4a]

Many keep a couple of Sabretusks for their keen noses - a tradition that goes back to Khared the Red, the very first of the Ogre Hunters.[1][3a] Some also capture and tame usually vicious Blood Vultures to hunt down prey or attack enemies. [4a]

Hunters will drag especially impressive kills to a local Ogre camp which makes them popular visitors bringing not only food but new tales of their lives atop the mountains. However they will seldom stay long and return to their peaks to continue the hunt. [4a]

On the battlefield, the Hunters are an acute danger, for they are superior to common Ogre in every way, their lifestyle scting as a great catalyst for development. Not only that, but their Sabretusks are very dangerous as well, being fast, strong and tough. Add to that the threat of their harpoon crossbows and the common entourage of Gnoblar Trappers and you will get a dangerous enemy indeed.[1][2][3a].