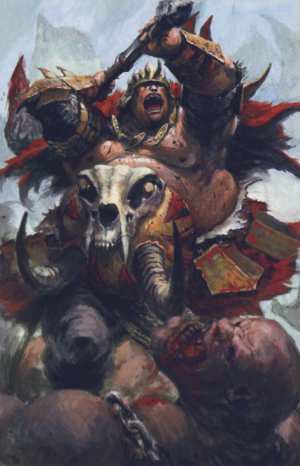 An Ogre Tyrant defeats an upstart.

Ogres call the leaders of their tribes Tyrants and it is easy to see why. Tyrants are the biggest and strongest individuals in a hulking race that prides itself on these physical features. To claim rulership over a group of Ogre requires a mighty brawler, a creature powerful enough to wrestle a Giant to the ground or smash his way through a fortified gate using only his bare fists. An Ogre Tyrant uses his tremendous size and brawn to dominate, earning the right to command the tribe by displaying prodigious feats of what the Ogres respect the most - strength, violence, extraordinary girth and a healthy, all-consuming appetite.[1a][2c]

The title of Tyrant is not a hereditary one. To become a tribe's Tyrant an Ogre simply has to beat the existing Tyrant in single combat; usually done in traditional one-on-one 'guts-out' fights in the maw-pit before the assembled tribe. These conflicts are no-holds-barred displays of bone­ crunching violence. A challenge to a Tyrant's authority can result in one of two fates for the challenger; if all goes well for the pretender to the throne, he will beat the incumbent Tyrant and consume his broken body, taking his place as the head of that kingdom. If the Tyrant proves stronger, it is the contender who is beaten down and messily devoured. The way Ogres see it, such a battle is unrivalled entertainment and one of the two fighters will get a good meal to boot. [1a][2a][2c]

Some of the oldest and longest serving Tyrants are known to sit upon thrones made entirely from the bones of those foolish enough to challenge their rule over the years. As the dominant male of the tribe, a Tyrant will frequently sire a host of strong offspring - the whelps of the largest Ogres usually grow to maximum size as well. Thus it is not uncommon for a Tyrant to face his progeny in the maw-pit and a successful Tyrant will often devour several of his own young over the years.[1a][2c]

All Ogres are greedy, but none more so than a Tyrant. A gnawing hunger drives Ogres to feats of greed and nobody embodies this insatiable, gluttonous behaviour more than a Tyrant. The longer he holds the title ofTyrant, the more ravenous an Ogre leader becomes, and a Tyrant's desires go beyond just food to also include hoarded wealth and power. The longer they rule, the more Tyrants become consumed with their status. To this end, the massive rulers accrue the best wargear in the tribe - often outlandishly large weapons and cumbersome armour. A Tyrant's gut-plate must not only cover his prodigious stomach, but also be more impressive than anyone else's. Beyond elaborate arms and armour, Ogre Tyrants can think of little else to spend their plunder on - however, this does not stop them from adding to their stash. Even when a Tyrant has filled his hidden hoard-cave, he will still readily go to war to snatch up yet more.[2c]

A Tyrant will use his boastful titles as the latter part of their names, each indicating particular accomplishments during their ascent to the throne. As a successful Tyrant's reign of bloodshed extends, so does his name, often resulting in long lists of violent superlatives. The now-legendary Olflab Stonecruncher Fatgut Deathcheater was an Ogre who remained Tyrant of his kingdom for over ninety years before choking to death on his great grandson's skull.[1a][2c]

Below follows a list of some of the most famous Tyrants to have existed.

The most powerful tyrant at the moment is Greasus Goldtooth, the Overtyrant of the Ogre Kingdoms. Having subjugated all the tribes living in the mountains surrounding his own kingdom, Greasus has imposed multiple laws upon his kingdom; for example, it is now prohibited to assault any trade caravans passing through the Overtyrant's kingdom.

Blaut Feastmaster, the heavily-jowled the Tyrant of the Feastmaster Tribe, became famous after he, having traveled into the Empire, brought back an entire string of enslaved Halflings to his tribe (instead of eating them when he caught them). These Halflings now perform the same duties as the Gnoblars of other tribes.[1b][2b]

Shrewd Fulg is the leader of the aptly named Tribe of Shrewd Fulg. Although far from the most powerful Ogre physically, Shrewd is as cunning and evil as a an Ogre can be expected to be, and rules the north-western parts of the Ogre Kingdoms with an iron fist. Anyone who opposes him inevitably wind up dead from food poisoning or get "accidentally" eaten by one of his many pet monsters. Shrewd also has close connections with the Skaven Clan Moulder, and his servants live in perpetual fear of waking up to find themselves transformed into Rat Ogres, or something worse.[1b]

The Mountaineater Tribe is ruled over by Bauldig Mountaineater. During an attempt to scale Mount Thug, Bauldig came across an opening in the mountain. Although none knows for sure, Bauldig claims that inside the crevice he came across the heart of the mountain; a giant warrior of stone whom the Mountaineater claims he slew and ate. As proof of this, Bauldigs skin has taken on the color and consistency of rock. As a result, his servants regularly eat rock with any food they ingest, in the hope that they will become as tough as Bauldig himself one day.[1b][2b]

The Great Tribe of Ghuth Spawnchomper, ruled by the same, live in the northern wastes of the world, where they attack, kill and eat anyone they come across. Ghuth himself, in particular, has become heavily affected by Chaos; not only has he grown a crown of gesticulating fingers across his brow, but he has also begun to recruit Dragon Ogres into his tribe, despite the loathing Ogrekind in general has for the creatures.[1b]

The waypost of the the Sentinels are the last stop for any caravan hoping to cross the Mountains of Mourn. The waypost is ruled over by the Eyebiter Tribe, which in turn is ruled over by Grandfather Malron Eyebiter, an Ogre who, supposedly, has sired more children than any other Ogre in history.[1b]

The Ironskin Tribe live in the north of the Mountains of Mourn, and have a strange fascination with metal, valuing the metal more than they do gold. The tribe, under the leadership of Ghark Ironskin, have set up expansive trade agreements with the Chaos Dwarfs of Zharr Naggrund, and thus have access to more Leadbelchers than any other tribe, and Ghark himself ride into battle on top of a huge mechanical rhinox, whom some claim has been possessed by a daemon.[1b][2b]