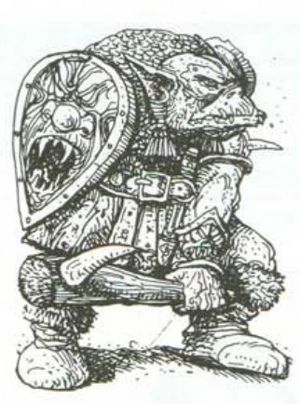 Orc Big Uns are the large tough Orcs foremost in their warrior society. [1a]

A Big 'Un is a name used to describe the largest Greenskin warriors within a tribe, acting as both the enforcers and as a dedicated retinue of tough-to-kill warriors under a Warbosses rule. A Greenskins natural goal in life is to constantly fight and grow bigger within his society, which usually attributes to an increase in both personal status and wealth. Eventually, these Greenskins would only be able to reach a certain size before their growth begins to slow dramatically. These changes are usually contributed when an Greenskins finds an opponent that is both larger and stronger than even he is. These Greenskins are usually called Big 'Uns for the Orcs, and Little Big 'Uns for the Goblins, whom have all grown to such a size that they tower over the rest of their tribe and are decked-out with some of the best armor and weapons around.

These massive Greenskin warriors are considered the enforcers and lieutenants of the tribe's current Greenskin Warboss, where their duties usually meant that they would go around and bash the heads of those disobedient Greenskin that tries to stir up trouble. Only the largest and most toughest Greenskin is allowed into this group of bruisers, and the most common way for an Greenskin to become a Big 'Un is to simply challenge one in combat.

Should the Greenskin win his duel against a Big 'Un, he is often readily accepted into the Warboss's retinue. However, as well as being the enforcers of a tribes Warboss, the Big 'Uns are also the greatest threat to a Warboss's personal rule. Since most Greenskins are constantly trying to find ways to increase their own size and status, a Big 'Un would in time challenge the current Warboss into a duel. Should the Big 'Un win, he would instantly become the new Warboss, but should he lose, the Warboss is immediately keen on disciplining his retinue of Big 'Uns on why he is still the leader of the tribe. Using fear to intimidate his lieutenants from further disobedience, it is only when the Warboss is at his most weakest, such as being injured in battle, will a Big 'Un rise up to challenge him once more.

When the tribes are pressed into battle, the Big 'Uns are known to congregate into their own warbands of heavily-armored warriors whose responsibility is to safeguard the Warboss from all threats. They have also been known to wander around the battlefield as a disciplinary figure that keeps the Greenskin horde in line. Should there be brawls springing up amongst the ranks, the Big 'Un are often sent to quell the infighting before it gets out of control. However, should the situation demands it, the Big 'Uns have also been known to fight in the thickest of the fighting, where their toughness and armored bodies can endure the worst the enemy can throw at them.

Following a battle, they loot the best wargear. [1a]