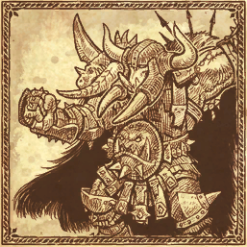 Orc Choppas are particularly unhinged Orcs who act as berserkers in combat.

Orcs are always itching for a fight, and at the best of times their insatiable bloodlust is barely restrained long enough to form some sort of rudimentary plan of attack. Choppas dont even have that minimal self-restraint. Ornery and savage, their one-track mind is dead seat on getting stuck in and bashin heads! Chopping is what they live for, chopping is what they are best at, and this one-track focus makes them ferocious fighters. As such, a Choppa who lives long enough quickly turns out to be the most elite fighter of the Greenskin horde, wreaking havoc throughout enemy lines purely for the sake of satisfying their own self-indulgent bloodlust. Even the most stable Orc is only a hair's breadth from coming unglued in the heat of battle. It is to the great relief of their opponents and allies alike that most of them manage to keep it together. There are some Orcs that can't be bothered with that sort of thing. These are simple creatures: simply violent, simply well-armed, simply a bloody nightmare to keep from running blindly into the fray. They are among the deadliest of opponents one will ever face in the heat of a melee. These are Choppas, named for their weapon, and their frenzy is to be feared.