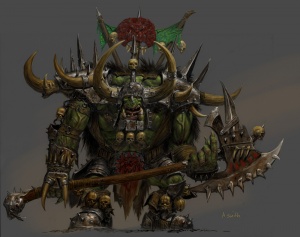 Hulking masses of green muscle, Orc Warbosses are the strongest Orc warriors within a tribe, being both a supreme iron-fisted tyrant and a hulking behemoth that is considered by himself to be the greatest Greenskin warrior around.

These powerful individuals are relatively cunning and exceedingly powerful warriors, having fought and pummeled his way through his tribe's hierarchy by winning battles and killing every challenger that would dare to defy his brutal rule. Equipped with powerful weapons and armor, these hulking, brutish warriors are near unstoppable upon the battlefield.

Since Orc culture is based on the idea that it is the right and indeed duty of the strong to oppressively rule the weak, larger, stronger Orcs such as the Warboss himself are accorded higher status within society. In more pratical words, Orc Warbosses literally live to fight. The sophistication of their tactics varies enormously according to who is in command of them and how effectively a given Boss is able to communicate with his troops. Orcs become Bosses through being bigger and tougher than other Orcs, not necessarily through being more intelligent, and many an Orc Warlord or Boss simply sends his troops at the enemy with little thought for tactics, trusting to their innate strength and ferocity to win the day.