Order of the Black Rose 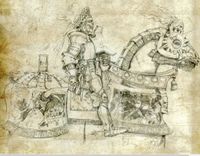 Knight of the Order

The Order of the Black Rose is a Order of knights that serve as bodyguard to the Elector Count of Talabecland. [1a]

Maintained by the state, their numbers are kept at one hundred. [1a]

The hundred knights charged a thousand strong pike phalanx at the Battle of Guildfried Field who broke and ran as they came at them at full tilt. [1a]

As Countess and later self-proclaimed Empress, Ottilia I led them in battle and they played a pivotal role at the Battle of the Talabec in 1360 IC (Imperial Calendar).[1a]

Their armour is stained black except for their gauntlets which are red, symbolising the blood of their enemies whilst their heavy horse barding has many designs of Morr. A rose and thorn design is emblazoned on their shields