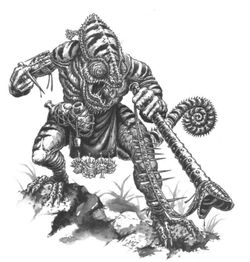 Oxyotl, He That Hunts Unseen is a Chameleon Skink who was spawned in Pahuax before the Great Catastrophe. [3a]

No Slann will read his mind in case any taint of Chaos is within him. He is however able to detect the presence of the minions of the Dark Gods and often when Daemons manifest they find Oxyotl awaits them. [3a]

An accomplished hunter, he harried the hordes of Daemons with his spawn-kin, before eventually being forced back into the temple-city. He and the last surviving Saurus protected Mage-Lord Pocaxalan as he tried to complete a ritual to banish the entire horde of Daemons in one fell swoop. However, the Chaos powers tricked him and he was drawn into the Realm of Chaos, along with his protectors.[2b]

Oxyotl awoke to see Daemons eating the entrails of his deceased master. All but invisible, at first he went completely unnoticed by the denizens of the hellish nightmare he now inhabited. Later, he covered himself with the blood of the Flesh Hounds tracking him in order to smother his scent.[2b] He eventually found his way back to Lustria, appearing in the year 2517 IC. His arrival coincided with the first spawning of Chameleon Skinks in thousands of years.[2a]

The return of Oxyotl is seen as an omen, a sign that the Daemons will soon return. Although no Slann would dare read his mind and risk the taint of Chaos, and the Chameleon Skink speaks not of how he escaped, whilst in the Realm of Chaos he witnessed what would happen to the world if Chaos was victorious. He has gathered others of his kind, mustering strength for the return of the Daemonic hordes.[2b]

He fought at the Siege of Hexoatl, defeating the Lord of Change Tzara'riador in the Pit of Sorrows. Oxyotl also helped defeat the Deamons that errupted from Xahutec with several bands of Chameleon Skinks. [3a]

Against the enemies of the Old Ones, Oxyotl kills quickly and efficiently. Oxyotl is adept at gathering and mixing poisons. In fact, it is said that some of the toxins he uses were gathered in the Realm of Chaos itself.[2b]

In Warhammer Armies: Lizardmen (5th Edition), there is a special character named Oxayotl, who is also a highly skilled Chameleon Skink. This is probably the same character as Oxyotl, with a slightly alternate spelling.[1]