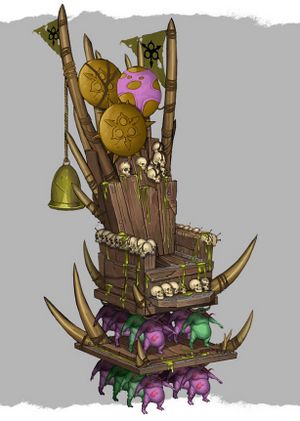 Palanquins of Nurgle are ornate, mobile throne like mounts used by Champions and Daemons of Nurgle. The Palanquins and their riders are borne into battle by a surging mound of Nurglings.

Nurgle often bestows a Palanquin upon his Champions, whose bodies have often already become so grossly bloated in Nurgle's service to reduce their movement to a ponderous gait. The rider sits casually on the Palanquin, propelled quickly by his Nurgling bearers wherever he wishes. Surrounding the Palanquin at all times is a swarm of flies which blind and confuse the enemy as they buzz into their eyes and ears.

Old miniatures or scratch-built models of the Palanquin are still fielded by some gamers (even in Grand Tournaments), who use them to resemble Chaos Chariots or a Chariot of Nurgle. Coincidental with the release of Daemons of Chaos a miniature for Epidemius was released which included a palanquin carried by Nurglings.