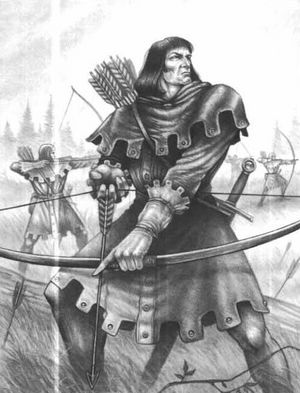 Peasant Bowmen are the Bretonnian serfs drafted for war by their lords, just like Men-at-arms.[1]

Peasants are not of course required to engage the enemy in hand-to-hand combat and may shoot enemies such as Goblins as they would vermin threatning their fields. [3a]

They are armed and uniformed from the castle armoury [3a] but most longbows are prized family heirlooms. [4a]

Unlike Men-at-arms Bowmen have trained with a longbow, which allows them to provide ranged support for the army. While the nobles allow it because they consider peasants to lack honour, they still do not provide any equipment for them, forcing Bowmen to make do with whatever they brought to the battlefield, making even light armour a prized rarity in their ranks.[1][4a]

This, and the fact that they have not trained for close combat, would make Bowmen easy prey for almost any enemy. To counter that, they use the so-called archer stakes to even out the odds. Should the stakes fail, it could be taken for granted that they will run, hoping to never see another battle. The most important factor preventing them is their own lords, whose very presence can inspire/intimidate them into holding their ground.[1]

6th Edition states that the Bowmen are not armed by their lords.[4a]