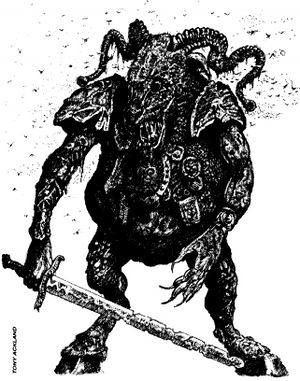 Pestigors are Beastmen who are sworn devotees of the Chaos god Nurgle. [1a]

They are racked with pestilence, disease and malformations but still maintain the morbid vigour of their patron god. Another abnormality that they have is that they often bear only a single horn, which is very uncommon among Beastkin. They are extremely tough and carry a substantial amount of armour (for Beastmen), as well as being more organised and disciplined. Other lesser Beastmen among both Gors and Ungors revere Pestigors and other Bestigors blessed by Chaos, respecting them greatly.[1a]

Their fur is usually brown but often hidden beneath dung and other filth, their form usually bloated with disease and with prominent acscesses, cultivated to bloom in the shape of their gods rune. Highly favoured pestigors have the Tears of Nurgle - unhealthy secretions dripping from their ears, eyes, mouth and nose. [2a]

Many of them carry Nurgle's Rot. [2a]

Beastmen of Nurgle hate followers of Tzeentch. [2a]

Pestigor wizards use spells from the Lore of Nurgle as well as other spells. [2a]