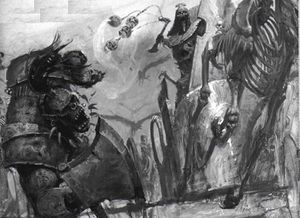 King Phar is a Tomb King and the ruler of the city Mahrak in the land of Nehekhara. [1a]

In the time of the first coming of Settra. He was a proud and arrogant man and stood against the advance of Settra.[1b]

Mahrak was a wealthy city. Phar had made this so by driving out the greenskins from the surrounding area, allowing trade free passage. His people liked him as a leader and were glad of the wealth he brought. When he heard of the advance of Settra's army up towards him through the Valley of the Kings, he set a trap. He was victorious and ambushed Settra in the valley, where his troops easily outmanoeuvred Settra's, preventing the conquest of Mahrak.[1b]

The city held out for decades against conquest by the armies of Khemri, being besieged many times. Eventually, King Phar suffered the worst fate, died of old age. Only then was it possible for Settra to conquer the city.[1b]

After Nagash's spell, Phar was one of the first to rise. Such was his rage that his people had bowed down to Khemri, that he broke into the tombs of the other rulers of Mahrak and destroyed their bodies, burning them all. Thus he prevented them from rising again.[1b]

Phar still opposes Settra, fighting with his legions of undead warriors against all who would try to bring subservience to the city.[1b]

He was awakened by Goblins attempting to steal his treasure and summoned his army to deal with the invaders into his lands. Riding forth in his chariot he defeated the leader of the Orc horde in single combat, adding a new skull to his flail as the survivors fled. [1a]

King Phar is now, as are all Nehekharan people, undead. As such he is wrapped up in bandages like the other Tomb Kings, but is characterised by his Flail of Skulls, one which he used against Settra when he was alive the first time. He has an iron will and will project this to his followers.