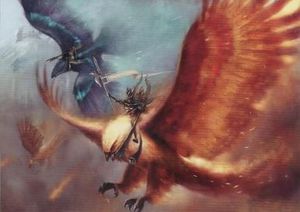 The Phoenixes of Ulthuan dwell amongst the Flamespyres -- great alabaster pillars of rock that stand sentinel about the Shrine of Asuryan. [1a]

These constantly burn with magical flame, for Aqshy -- the Wind of Fire -- gusts about these rocks as it is drawn inexorably towards the Isle of the Dead. Yet Aqshy has left its mark on more than the silent stones. Over generations, the Phoenixes of the Flamespyres have become attuned to fire magic, harnessing it at a whim. [1a]

When a Flamespyre Phoenix is enraged, its plumage explodes into a magical flame, causing the creature to leave a trail of angry fire in its wake. Should a Flamespyre Phoenix be slain, it explodes, leaving naught behind but a shower of flaming cinders. If the Winds of Magic are at ebb, the creature perishes, as all living beings eventually must. Yet if the air is sufficiently suffused with magic, the fiery fragments swiftly recoalesce; with a booming inrush of air and a flash of searing light, the Phoenix is reborn to fight anew. [1a]

Flamespyre Phoenixes lack the gift of a civilized tongue. However, they understand Eltharin well enough and, if treated with proper respect, can be bargained with. Indeed, an accord exists between them and the Phoenix Guard, with the latter often calling upon the birds to serve as war-mounts. This is a truly fearsome combination, the clear-headed judgement of the Phoenix knight directing the Flamespyre's fires to where they can cause the most damage. [1a]

As a Flamespyre Phoenix ages, its body cools, and even begins to sap heat from its surroundings. Finally, the plumage that once blazed with fire grows heavy with frost and ice. Once this occurs, the Phoenix must leave the Flamespyres, for the chill that surrounds it causes agony in its brightly burning kin. Most such Frostheart Phoenixes dwell in lonely exile on crags about the Eataine coast, until their bodies finally freeze solid, to leave curious frozen statues along the crags and cliff tops. Others return to the Shrine of Asuryan, to offer their final days in service as war-steeds. [1a]

Whilst a Frostheart Phoenix may not possess the vigour and fire it commanded in its youth, it is a much hardier mount. The ice that sheathes its form is as hard as glass, and enemies -- not having the benefit of the rider's enchanted armour -- find their own strength and resolve eaten away by its chill presence. Knowing they can no longer resurrect themselves in magical fire, the Frostheart Phoenixes fight even harder in the defense of their homeland, determined to end their existence striking a final blow against the enemies of Ulthuan. [1a]