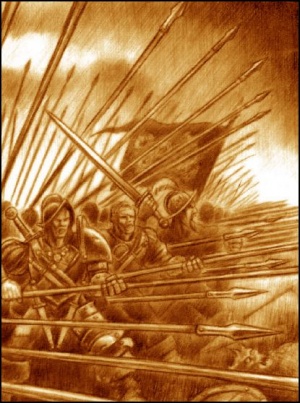 Pirazzo's Lost Legion are a famous band of Dogs of War mercenaries that had made legend for being one of the few armies in the world to have set foot upon the lush jungle-continent of Lustria, and live to tell the tale. [1a]

Not only have these men survived this perilous journey, but their leader, Fernado Pirazzo himself became wealthy with the treasure he has gathered, and has since become a highly successful mercenary captain employed by the rich and wealthy of many nations of the Old World. [1a]

It is said that his legion fought for the mysterious Lizardmen civilization of Lustria, aiding them in destroying a force of Undead warriors assailing the jungle nation from the eastern coast. His highly-effective fighting force devastated the Undead hordes, and managed to grab a ship and set sail for home with a large cargo of fabulous treasures. It is said that he became so wealthy that one of the Merchant Princes of Tilea tried to assassinate him in order to steal his wealth. [1a]

Pirazzo's Lost Legion is all that remains of a expeditions sent to Lustria by the Merchants of Tobaro. The regiments in Tobaro were amongst the most reckless poverty-stricken youths of the city. The promise of untold wealth to be found in the jungles of Lustria was a temptation none could resist and they joined by the droves to be part of this magnificent expeditions. Although only one-third of these men will survive the journey, those that remain will become richer beyond their wildest dreams. [1a]

Fernado Pirazzo was hired to command one of three regiments of the expeditionary force. Although young back then, he was already an experienced mercenary captain skilled in the art of war. Before the expeditions embraced, he trained his men in the use of both pike and crossbow, the two traditional weapons of many Tilean mercenaries, foreseeing the conditions the regiments would encounter in the deep damp jungles of Lustria. No sooner had the expedition arrived in Lustrian waters that it ran into trouble. When all the mercenaries had disembarked, the sailors of the ships, who were also mercenaries, weighted anchor and abandoned them, taking the pay chest of the three regiments with them. Pirazzo had advised against a landing like this and told the other Captians about a possible mutiny, but he has been outvoted by the other two mercenary captains. Now the mercenaries realized that he was by far the best leader and the other two regiments mutinied. Their incompetent and unfortunate captains were cast adrift in the mangrove swamps and the mercenaries joined together as a single regiment under Pirazzo's command, calling themselves the "Lost Legion". [1a]

Everybody knew that obeying Pirazoo's orders was their best hope of survival, and so no one objected when he insisted that the troops remained encamped on the coast until everyone is trained to use both pikes and crossbow. After several weeks of training, all the bad elements amongst the stranded mercenaries were either dead, executed, or had split off unto the jungles in small groups. The rest were all trained to Pirazzo's exacting standards and all of them were men he could rely on to obey his orders. Now he was ready to lead them into the interior for Adventure, Riches or Death. [1a]

After a grueling march, the Lost Legion came upon some Lizardmen ruins deep within the jungle canopy. Cautiously, they entered the ruined city, expecting to find an ambush, but instead found gold and gems in various vaults and chambers. As the mercenaries were marching out again, laden with treasure, the Lizardmen launched a series of ambushes on the causeway and spawning pools of the ruined city. Thanks to Pirazzo's foresight in training his men to the use crossbows and pikes, none of the enemy could get at the regiment in enough numbers to force them off the causeway. In the afternoon, the Skinks met with crossbowmen volley again and again, and later, the Saurus were repulsed by the long formation of Pikes. The losses amongst the Skinks and Saurus warbands were terrible and soon the ponds were choked with scaly corpses. [1a]

Just when heat, thirst, and fatigue were almost beyond endurance, the Mage Priest called off the attack. The Mage-Priest realized that the enemy seemed to have the answer to both his skirmishers and his shock troops and so he had to think of a more cunning tactic to remove them from the city. In the pause, Pirazzo found himself considering the possibility of striking a deal with the Mage Preist to serve him as a mercenary and ultimately return home with the rewards that the Slaan might give him. It was a strange thought, as if the idea had been put in his head from somewhere else. Quickly he ordered his men to put down their loot and retreat along the causeway. He was obeyed without question, though it broke the men's heart to leave all those treasures of Gold. [1a]

The Regiments marched back into the ruins and made camp in the plaza to await events, although Pirazzo's did not know what to expect. When the sun rose, the sentries were amazed to see not only the piles of treasure returned to the mercenaries, with the biggest and best tables of gold around, but also heaps of food and great gourds of refreshing water. The Plaza was lined with Saurus Warriors, permitting only one way out of the ruins; to the south. The Lost Legion took the loot, the supplies and the road appointed to them. The Legion marched for many weeks to the south. They did not encounter any more cities, but did find futher piles of supplies along the route. Eventually they entered a eerie landscape full of fetid swamps and it was here they were attacked by the Zombie Hordes of the Vampire Coast. Now it was clear that the priest wanted to send Pirazzo's Legion against their most dreaded enemies. The Lost Legion fought valiantly and defeated the Undead wherever they met him. At last they reached the sea and it was here that the Mecenaries filled their knapsack with treasure from shipwrecks which they found scattered along the coast. Then taking the best timbers, they repaired the most seaworthy of the decaying hulks and put to sea. [1a]

Just when the hulk was on the verge of sinking during its long voyage, Pirazzo sighted land, it was the Coast of Araby. Not long after the Lost Legion marched inland, they were hired by one of the emirs of the corsairs who were afriad of what Pirazzo and his men might do if he didn't hire them. Since then, Pirazzo's Lost Legion has fought its way across Araby, Sartosa, and into Tilea once more serving many master's, wining great wealth and recruiting the reckless and adventurous to the regimental banner. [1a]

Trained in Lustria [1a]

The Legion can be hired by any army except Bretonnia and the Vampire Counts. [2a]