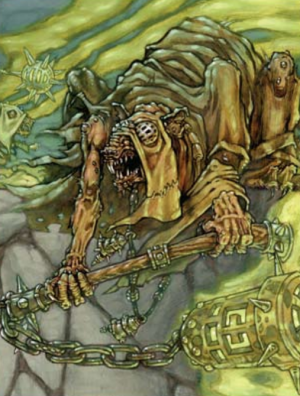 The Plague Censer Bearers are the suicidal skaven fanatics of the Clan Pestilens who carry warpstone burners into battle. [6]

They are warriors chosen from amongst the ranks of the Plague Monks for their unquestioning devotion to their faith and cause. To be chosen for such a duty is a grand honor, and one that is never refused, even though it will lead to the Monk’s own demise. To die in the service of the Horned Rat, swinging a smouldering plague censer with righteous zeal, is compensation enough for these maddened cultists. Unlike in other Clans where ferocious politics and killing earn special attention of any sort, among the Plague Monks, it is considered dedication. And those with the greatest dedication are allowed the “privilege” to wield plague censers.[5][3]

A plague censer is a hollow spiked ball attached to a length of chains. In an unholy ritual, a Plague Priest would read aloud disturbing and disease-ridden passages from the Book of Woe, while a shard of warpstone is ceremoniously placed inside the cruelly spiked globe. Afterwards, a ladle's worth of vile contagions is added, poured over the warpstone itself. Hellish runes begin to burn as the concoction begins to bubble into a boil, releasing large fumes. Contact with the haze of noxious fumes emitted from a gently-swaying censer will cause flesh to erupt into sores and fluid-filled blisters. Exposure to these fumes can also cause horrific damage to any who breaths it, which fills the lungs with virulent fluids that causes the victim to die of suffocation. Extremely few creatures devoid of common sense can be anywhere near such a weapon, let alone wield it into battle.[4][3]

As such, the image of the Censer-Bearers rhythmically swinging their plague-filled weapons at the forefront of an oncoming skaven horde is the stuff of nightmares. A Plague Chanter, the unholy acolyte of a Plague Priest, is usually the ones who zealously leads the Censer-Bearers into the fray. When the enemy nears, the foaming and fanatical Censer-Bearer would increase the arc of their swings, leaving contrails in encircling rings as they dash towards the foe. Reckless and fully deranged, the Censer-Bearers often fall victim to their own weapon, inhaling a lung-full of pollution or even impaling themselves into the arms of the enemy before they and those around them, would die an agonising death. Even as they die, they scream their thanks to the Horned Rat as their lungs fill with blood and pus, such is their devotion.[2][1][4]