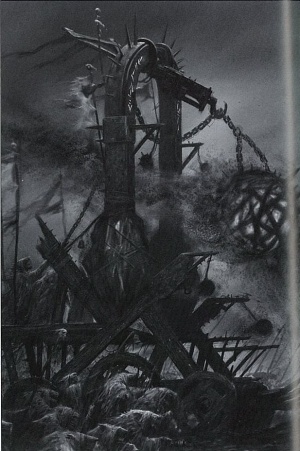 A Plague Furnace is completely riddled with woodworm and decay. In fact, the creaking of its wheels can be heard even if the midst of battle. However, the Great Censer suspended from an archway of stone is the thing that most attracts the attention of the enemy. It swings back and forth, billowing fumes so deadly that even the Plague Monks - servants of decay who delight in infecting themselves with disease - are not immune to its effects. In fact, during the Battle of the Mists in 2489 IC so many Plague Furnaces were deployed by Clan Pestilens that whole areas of the jungle were obscured by the deadly fog and the billowing cloud of toxic fumes could be seen for miles around.[1a][1b]

In battle it is pushed by a unit of chanting Plague Monks or even other Skaven. At close range the clouds of infectious gas begin to take their toll on the enemy, although it is not until the Plague Furnace gets into contact with them that the true purpose of the Great Censer becomes clear. The fume-addled crew release the rusty chains holding the Censer in place, allowing it to swing down and crush the enemy troops beneath its weight. However, as with all Skaven weapons, things can, and frequently do, go wrong. The Censer could be released too early and smash into the Plague Furnace itself or release huge clouds of even more potent fumes that kill large numbers of the Plague Monks.[1b]