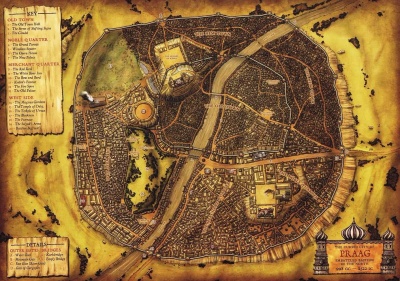 Praag is one of three largest cities in the land of Kislev and is also known as the Cursed City. [1a]

Praag is the most northerly of the cities of Kislev and is located on the river Lynsk, where Kislev borders the lands given over to Chaos.It is an unfortunate city: having fallen once to a Chaos incursion, it has since been regarded as cursed. [1a]

After the third attempt by the city to secede, its Ungol rulers were replaced by a Gospodar representative of the Tzar, answerable only to that power, they were given the title Duke of Praag and reside in the New Palace. [1b]

The city acts as a gathering point for the horse tribes to the north, and as such has a high Ungol population. Three times the city has attempted to secede from the control of the Tzars, and three times they failed, twice by being starved into submission by trade embargoes from the south and once by military conquest. It is now ruled by a Gospodar governor responsible only to the Tzarina herself.[1a]

Praag has suffered several sieges in its history. Not all these sieges have been withstood, and several years ago it finally fell to the forces of Chaos. Amid a destroying storm of Chaos which had swept through the city, the servants of Chaos entered, slaying women and children. The city's grandeur melted into a nightmarish travesty.[1a] As always, the tides of Chaos receded, but the city had become the foulest of nightmares. Molten glass flowed, rows of houses melted into caverns and all manner of new shapes. Even the living had been reformed so that living flesh became jumbled with the stone of the houses. Those who had escaped the fall of Praag returned to find the city had been utterly corrupted.

King Zoltan of Praag ordered the city burned to the ground, so that the foulness would be cleansed. A new city was built whose stone walls stood as strong as those of Kislev. Soon however, the terrors of the old city began to grow back, polluting the new buildings. The nightmarish reality steadily returned, until faces appeared in the walls and grasping hands arose from the pavement.

Only through vigilant burning and rebuilding is any sanity retained. The reputation of Praag is grim, and travellers tell sickening tales of its horrors.

A later Chaos invasion was halted in the streets of Praag when its warlord, Arek Daemonclaw, was slain by Gotrek Gurnisson.[2]

Many tales in both the Empire and Kislev speak of a beautiful girl who will save the world from Chaos if only she can be freed from her glass prison. Some claim it is the Goddess Shallya, others say she is Genevieve Dieudonné (Which the vampire heroine herself fiercely denies if in earshot). Perhaos the most famous version is by Anton Denisovich, a great opera The Girl in Glass where the girl is the Goddess of Purity buried beneath Praag and who can only be freed by the kiss of a cursed Chaos Warrior who eventually does so due to his love for her, despite knowing she will destroy him when she is freed. The opera ends with the total destruction of the Chaos forces and the salvation of Praag. Unscrupulous Kisleites seek to exploit visitors by offering people a glimpse of the real Girl in Glass, for a moderate fee. [1b]

Chaos is so omnipresent on the streets of Praag that any spellcaster, even the Ice Witches may feel its sting and be in danger of their magic running out of control or worse. Wise Women are welcome, but almost none step onto its tainted soil unless they absolutely have to and it is race for a Ice Witch to dwell long in the city. [1b]