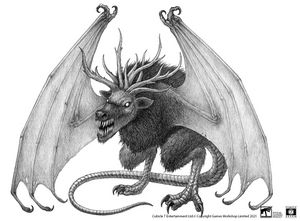 Preyton are infamous beasts, blighted in form, incandescent in rage found in the Forest of Arden. [1a]

Preytons kill for sport, leaving corpses in their wake upon which they don’t even bother to feed. Although they do have wings, they seldom fly above the forest canopy, preferring to stalk prey beneath the trees. [1a]

Twisted creatures, their forelegs and body resembling a partially-scaled and malformed stag, their hindquarters that of a lion’s. Their equine heads sprout great sharp blackened antlers, have glaring red eyes and multiple rows of jagged fangs. [1a]

The Priest of Taal, Regimius Braun believes that Beastmen create them with foul rituals from the corpse of a Great Stag. [1a]