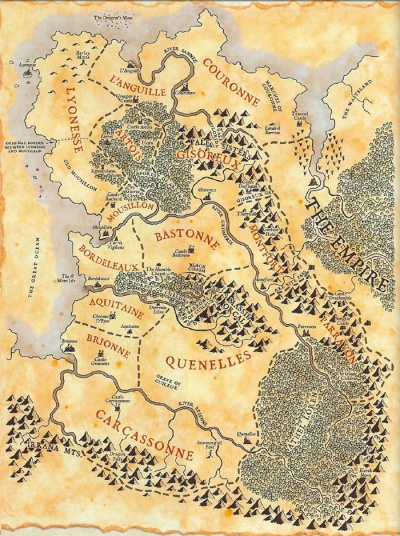 The Dukedom of Quenelles is a founding Dukedom that lies upon the borders of Athel Loren, at the south-eastern corner of Bretonnia.

Being the largest out of all the Bretonnian Dukedoms following their annexation of Cuileux during a Greenskin invasion in 900 IC, Quenelles is so massive that it surronds the entire mountain range of Massif Orcal.

Lying at the very center of the Dukedom, the Greenskins living within Massif Orcal have always been a bane to the existence of all those living near the mountain. Unlike other ducal lands plagued by Greenskins however, the people of Quenelles has such unreserved hatred for these raiders and barbarians that seems to far outshadow all those living within Bretonnia. Some have said that when the Dukedom of Cuileux was destroyed by the Greenskins, the ghost of these people have put a curse upon Quenelles that would ensure that they shall continue the fight against them for the rest of time. Its current ruler is the fearsome Duke Tancred II.

Located on the River Brienne near the edge of Loren, much of the original Elf stonework is still intact. [5a]

After Cuileux is overun and destroyed by greenskins in 930 IC, the knights of Brionne and Quenelles ride forth to wipe out the enemy and lay claim to the land. Single combat between the two lords results in the death of the Lord of Brionne. [1a]

As the Red Pox ravages Bretonnia, the Skaven besiege both Brionne and Quenelles but both cities are saved by Duke Merovech of Mousillon, the Duke of Parravon and the elves of Athel Loren. [1a]

Duke Melmon emerges from Athel Loren in 2236 IC but ages dramatically and dies before the end of the day. [1a]

Tancred, Duke of Quenelles defeats the undead and skaven after they sack the abbey of la Maisontaal in 2491 IC. [1a]

The people of Quenelles are most renowned for their unrelenting hatred of the Greenskins that constantly raid their lands. This is a little strange; it is certainly true the inhabitants of the Massif Orcal raid very frequently, but Greenskin raids have not had the same effect in other regions. Some people think that the dead of Cuileux have placed some sort of curse on the inheritors of their land, compelling them to continue the fight. Certainly, it is notable that every single Queneller festival involves burning a Goblin or Orc, in either effigy or a real one.

A lot of Queneller adventurers left to take the fight to the Greenskins. Such folk often head into the Massif Orcal, but there are Goblins and Orcs in all mountain ranges, so others go further afield. They often ally with the Dwarfs, seeking to drive the Greenskins from the Dwarfholds. The politics of the dukedom are dominated by the succession question, as Duke Tancred is not the only one to have noticed that he is getting old. If Einhard returns, he is the clear heir, but most Questing Knights who are going to return have done so within ten years. There are about half a dozen nobles with a realistic claim to the dukedom, but two stand out.