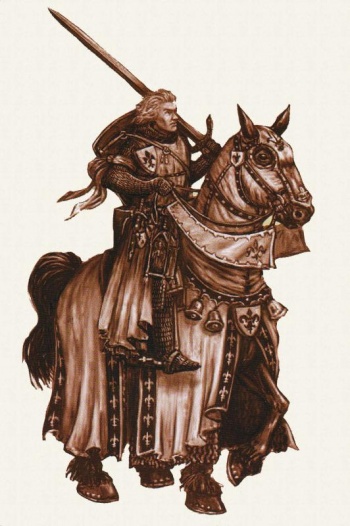 A Questing Knight is a former Knight of the Realm who gave up his social position to embark upon a spiritual quest for the Grail and to prove and enhance his martial skill. He takes up the traditional weapons of the Quest - a double handed sword and a shield marked with the Fleur de Lys. Questing knights are seen as heroes throughout Bretonnia, performing great deeds and feats in their attempt to become a mighty Grail Knight. Many Questing Knights possess magical trinkets and artefacts acquired during their journeys, adding to their already impressive skill in combat, despite part of their vow being to set down their lances, the most renowned and mighty Questing Knights seem to be considered worthy enough to still use them.

The years of a Questing Knight's life are filled with trials and hardships that strengthen his mind, body, and soul. The path of a Questing Knight is a winding one, for they are pledged to never sleep two nights in the same place and never to yield in their search while they yet draw breath. Questing Knights live a solitary existence, the Lady of the Lake their only companion. The quest for the Grail knows no physical boundaries and it is common for a Questing Knight to travel far beyond his domain and often beyond the realm of Bretonnia itself. They are guided by visions and will fight in many battles, facing dire enemies and hunting rampaging monsters like Manticores, Dragons and Chimeras or engaging in duels against Chaos Knights and other fell warriors, until he is worthy to find the Grail. Questing Knights are mighty warriors, heroes of renown who scour the land, killing the mightiest of beasts and foes, forever searching for the Grail.

Most Questing Knights will never reach this goal but those few who do, are allowed to sup from the Holy Grail, becoming fearsome Grail Knights, powerful champions of the Lady of the Lake.