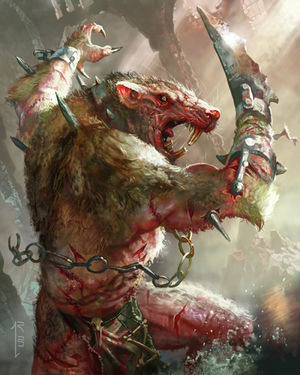 Rat Ogres are massive hulking monstrosities that represents the very pinnacle of Clan Moulder ingenuity, a lethal killing-machine beast that combines the inhumane reflexes of a Skaven with the brawn and size of an Ogre. Though many would be mistaken otherwise, Rat Ogres are not a separate breed of the Skaven race, rather Rat Ogres are creatures born from the fusion of crossbreeding different types of horrific creatures with Skaven blood, and surgically augmenting what is left.[2]

While Clan Moulder certainly succeeded in creating deadly war beasts, Rat Ogres are arguably flawed creatures, bereft of reason and nearly devoid of sanity. Their unlikely genesis has left them utterly dependent upon their creators for any kind of mental faculty and they are literally incapable of functioning without the direction of another's will. Their small brains are as such devoted singularly to the pursuit of fighting, tearing and simply enacting wanton bloodshed.[1]

Once a potential Rat Ogre is born, the creature is subjected to a long series of experiments intended to encourage traits that their creators favour, such as overwhelming bloodlust, mindless ferocity and unnatural loyalty. Many of them may indeed have Ogre blood in their long and varied ancestry, though none but the eldest Master Mutators could say. They generally appear to be massively over-muscled Skaven standing some 10 feet tall at the shoulder, though many of them are grossly misshapen, and may have grafts, both metal and flesh, fused to their bodies.[2]

Though they all share similarities, no two Rat Ogres are physically identical. Mutations bred into the creatures by the Master Moulders give them a variety of different shapes, sizes, and capabilities. Some are even surgically modified with implanted weapons, many of them experimental creations of Clan Skryre. Each Rat Ogre receives training, of a sort, which involves constant deadly duels with Clan Moulder’s other foul creations. Therein they learn to follow the guidance of their Packmasters and become used to the rigours of violent combat. They might also gain valuable insight into tactics and strategies, if they didn’t forget anything too complex after a day or so in their pens. Despite their physical boons, Rat Ogres are barely sentient. Without the constant supervision of Moulder’s Packmasters, a Rat Ogre would wander aimlessly about the battlefield, only stopping to grab a quick snack or to rip the throat from any living thing that was unlucky enough to attract its mercifully short attention.[2]

In battle, Rat Ogres are usually sent in packs while being supervised by a small team of Packmasters. Once unleashed, a Rat Ogre is totally consumed with an unnatural rage and would begin to rip, tear and kill anything that the Packmaster has directed his wrath to. A Rat Ogre pack moves with a terrifying speed on the battlefield. Once the pack collides with the enemy, all that can be heard over the battle are splintered shields, snaped bones, and the roars of the Rat Ogres drowning out the screams of their victims.[1]

As such, a Rat Ogre is incapable of almost anything except killing and warfare. After a battle, Packmasters must hurry to capture and restrain these brutes after a victory before they start killing each other. Such confrontations have left many scars upon the Rat Ogres skin, both from battle and the abuse of their masters. At the height of their rabid fury, Rat Ogres have been known to rip and devour chunks of their own flesh, as if they sought to tear apart the monstrosity that Clan Moulder has made the creature into.[1]

This variant strain is created by submerging the Ogre in a vat filled with growth agents to create a hunched beast with a massively over developed upper body. A platform is then attached to its back to allow a Skaven Warlord to ride atop it. [3a]