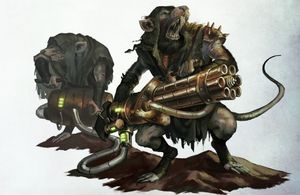 The Ratling Gun is a six-barreled rotary gun that is usually operated by a pair of Skaven who form a weapons team. [1a]

When Clan Skryre managed to obtain multi-barrelled guns of the Empire in around 2400 IC (Imperial Calendar) they were then able to create their own version.[1a]

Ratling Guns are a relatively recent invention of Clan Skryre. The weapon is operated by warp steam and a hand crank which rotates the barrels and unleashes a hail of warp-laced bullets sufficient to cut down an entire enemy unit. Clanrats refer to creatures killed by these guns as 'teeth-breakers' as the bodies tend to be embedded with dozens of the glowing bullets.[1a]

There are many and varied designs of the weapons, some are mounted on tripods, some have integral gun shields ans some of wheels, but all are as prone to malfunctions as they are deadly. One skaven works the hand crank whilst the other aims the gun as much as possible but failures of the warp steam generator can spin it and its crew in a random direction, likely unleashing it against their own forces. [1a]

Despite its problems, Skryre are unable to make enough to satisfy demand for it. [1a]

The Skaven operators are armed with Hand Weapons and wear Heavy Armour. [1b]