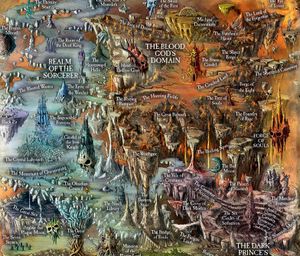 A mortals impression of the Realm of Chaos

The Realm of Chaos, also known as the immaterium, the spirit world, the aethyr and the warp, is another dimension - a separate reality from the physical dimension of the Warhammer World which is intrinsically linked to the mortal, material world. It is the source of all magic and within, the physical laws of our universe do not apply.Needs Citation

The nature of the Realm of Chaos

If humans and all other races did not exist, then the Realm of Chaos would be a grey, neutral void fot it is life, more specifically intelligent life, that fills and populates the Realm of Chaos with raw emotions with negative emotions that are generally stronger. [2a]

Within the Realm of Chaos, the physical rules of the material world, such as space, time and gravity, do not apply. It is an ever-changing dimension of pure magic that lacks the order and consistency of our universe, and indeed is the source of all magical powers in Warhammer Fantasy. [1a] The Realm of Chaos is home to many Gods, daemons, spirits and other magical entities. At the poles of the Warhammer World, there are permanent rifts to the Realm of Chaos which constantly spew raw magic (the "matter" of that dimension) into our world, warping and changing our reality.Needs Citation

The Elves describe the Realm of Chaos as being separated from the physical world by a "veil". This veil can be weakened in certain magically-saturated places in the world, and at various times (such as geheimensnacht and hexensnacht). It can also be torn asunder creating rifts to the Realm of Chaos through which magical energy, daemons and such can pass.Needs Citation

Even when the veil is strong, however, the thoughts and emotions of mortal creatures can influence the warp, creating eddies and tides in the magical energy. Most mortal creatures have an immortal magical soul within the Realm of Chaos. This soul is typically anchored to their physical body during life, but floats free upon death and is then vulnerable to being preyed upon by malevolent . To avoid their souls being eaten by Slaanesh, the Wood Elves and High Elves bind their souls to the physical world in the form of magical trees (The Weave) and waystones, respectively. Other Elves may pray to Ereth Khial to take their souls, stealing them from Slaanesh. Humans from The Empire pray to Sigmar, Morr and other gods to protect their souls upon death. Particularly powerful souls able to influence the warp to a great degree glow brightly.Needs Citation

The most famous inhabitants of the Realm of Chaos are Gods and Daemons. These entities are a form of coalesced magical energy that has gained consciousness and self awareness. The most famous of these are the Chaos Gods: Khorne, Tzeentch, Nurgle and Slaanesh. Each of these is fuelled by a primal emotion/sensation experienced by mortals. For instance as mortals experience anger, it changes the magical energy of the Realm of Chaos and feeds the God Khorne, who grows stronger. Daemons are best thought of as a fragment of their God, with the more powerful Daemons being larger fragments.Needs Citation

It is important to realise however that not all Gods in Warhammer actually exist in the Realm of Chaos. Some are merely objects in the physical world which are worshipped, such as the Great Maw and the Fire Mouth. Others Gods have entered the physical world in physical bodies and remain here still. Indeed, it is also possible for mortals to cross into the Realm of Chaos physically (ie: their physical mortal bodies enter the other dimension) by travelling through a rift. This is what Chaos Warriors do, returning with their Chaos Armour. In addition, mortals may be "blessed" by the Chaos Gods and actually be transformed into a daemon.

Whilst mortals may be unaware what a Daemon actually looks like, what they are or where they come from they may know myths and stories about them. The subconscious learns and informs how manifestations from the Realm of Chaos takes shape which then reinforces that image by those unfortunate enough to witness them so a a Bloodletter looks the way it does because people believe it should look like that, their subconscious, filled with abject terror, further underpins the Daemon’s perceived form. [2a]

In 1460 IC, Marius Hollsecher crossed physically into the Realm of Chaos and returned to write the Liber Malefic. Some who do this may become Gods themselves, such as Sigmar.Needs Citation

All these are heavily couched in metaphor and are relatvively mutable and chaotic being extensions of the Chaos God’s traits, much like their daemons. Should two mortals ever visit Nurgle’s garden, although they would both see a festering, decaying mass, it would still appear different to each of them. [2a]