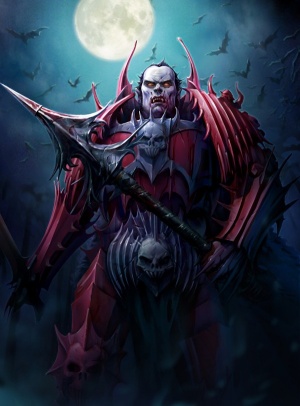 The Red Duke, also known as the "Scourge of Aquitaine" and "El Syf" was a great Vampire Lord and one of the mightiest Blood Knights ever to ride to war.

The Red Duke was one of the mightiest Blood Knights in existence, only Abhorash and perhaps Walach Harkon were superior to him in combat. The only other Blood Knight to come closer to destroying Bretonnia, was Duke Merovech himself.

In his mortal life the Red Duke was Duke of the Bretonnian province of Aquitaine. [1a] An avid crusader and mighty warrior, he was the brother of the Grail Knight King Louis the Righteous. He joined his brother in the Great Crusade against the Arabyans and their Sultan Jaffar, first freeing Estalia and then taking the fight into Araby itself. It was in Araby that the Duke earned the name El Syf ash-Shml or 'The Northern Sword' from the locals, though it was commonly simplified to just 'El Syf'.

Tragedy struck when the Duke appeared to contract a mysterious illness after surviving an assassination attempt by the Arabyans. Falling mortally ill, he was taken back to his realm by his loyal knights, there to lie in bed for several nights with little sign of improvement. However, this was not the end for the duke. In reality his illness was the Blood Kiss offered by the ancient vampire Abhorash, who came across the Duke in the Arabyan desert as he was fighting off an assassination attempt. Even though the Duke was eventually overcome, he slaughtered many and Abhorash was impressed by the knight's bravery and prowess. He gave the Blood Kiss to the poisoned and dying duke before having him returned to his camp where his followers discovered the 'mysterious illness'. After three nights of the Duke on his supposed death-bed the Bretonnian Baron who had orchestrated the assassination attempt sneaked into the Duke's room to finish the job. Instead he was most brutally and viciously murdered by the newly risen vampire lord.

Transformed completely in both mind and body, the monster immediately set about attacking and killing those he had protected, drawing to him Knights from all across his realm who sought to emulate his warcraft as he raised deathless legions with his new-found powers. The Duke believe that his brother the king had been behind the assassination attempt in Araby and turned his forces to destroying him and the king immediately raised an army to stop him. In a great battle at Ceren Field, the Red Duke fought against King Louis the Righteous, charging the Grail Knight wielding a lance soaked in the blood of Bretonnian knights. The Scourge of Aquitaine was one of the mightiest Blood Knights since Abhorash himself, but even he could not stand against The Lady's wrath, blinded by the holy light surrounding Louis his heart was pierced by blessed lance, skewering his body and lifting him from his saddle. The Duke looked down upon his brother, blood filled his eyes and he let out a horrific moan..The Red Duke was dead. [1a]

With The Undead army destroyed and its leader defeated, Bretonnia rejoiced in its victory. King Louis, knowing that the vampire could rise again, but not wanting to destroy his body out of respect for the great man his brother had been in life, the king opted to bury him in a magically sealed and protected tomb from which the vampire would be unable to escape, despite the pleas of the Prophetesses. [1a]

However, escape he did, almost 500 years later on a fateful night, a cabal of witches and corrupt nobles wished to evoke the warrior spirit of the Red Duke in order to channel his martial prowess into their chosen vassals for their own purposes. They broke the seals surrounding the tomb and unintentionally released Red Duke back into the world once more. However his time entombed without any blood to nourish him had driven the already viciously eccentric vampire completely mad.

In his madness the Red Duke fought a campaign recreating the war that led to his defeat at Ceren Field and the campaign in Araby. Though King Louis had long since passed away the Red Duke ignored the words of his saner associates and led his forces across the land, slaughtering his enemies, even if he didn't recognize them for who they were but rather imagining them to be his opponents from ages past, both at home and abroad. The Red Duke led an army of undead once again to Ceren Field, to defile the tomb of an ancient Grail Knight, Galand. In particular he battled against the new Duke of Aquitaine, Gilon who he saw as a usurper of his dukedom. Though he killed the ageing Gilon in a fierce battle, the Red Duke was injured by the Grail Knight and then confronted with the truth that not only was Gilon his own descendant, but that Galand was his son. This drove the vampire lord screaming from the battlefield, his army in ruins.

Riding into the wilderness, he was pursued by many brave knights but never discovered...[1a]

Rumours of his continued existence persisted for many centuries but the last confirmed sighting was towards the closing days of the End Times. When Duke Jerrod, leader of the Bretonnian contingent at the Council of Incarnates was exposed to a horrific truth about the Lady of the Lake he was determined to take his troops and marched back into the ruined and devastated remains of Bretonnia to see-out the end of the world there. The vampire count Vlad von Carstein told Jerrod that a small group of warriors, led by Gilles le Breton and an immortal warrior implied to be Abhorash, still fought in Bretonnia. He sent the Red Duke to act as a guide and escort Jerrod's knights to the abbey where they were making their great last stand.

In the original Circle of Blood campaign, the Red Duke was roused from his slumber a 1000 years after his first defeat by the Necromancer Renar and was not insane. [1a]