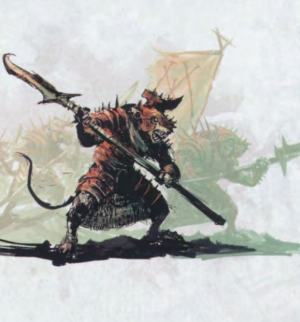 The Red Guard or Crimson Guard are the personal Stormvermin bodyguard regiments of Warlord Queek Headtaker. It took a fierce Skaven to survive the underground slaughterways of the City of Pillars. To join the most elite claw-units of all Clan Mors, a Skaven had to posses extrodinary strength, agility and martial prowess. Queek Headtaker personally took part in the selection and training of his elite Red Guard Stormvermin. He kept ten claws of these troops, each a hundred strong, as his personal force of bodyguards. They were given the best arms, armor and feeding right of all the troops under his command. In battle, the Red Guard serve dutifully well as Queek's honor guard, or as the spiked fist of his assault force.