Reikland is located in the west (lower left).

The Grand Principality of Reikland[1a][2] is a very important western province of The Empire, being the homeland of the ancient Unberogens[3][4] and Sigmar, founder of The Empire. Its colour is white and its symbol is an eagle representing Myrmidia. [5c].

The province is named after the river Reik[6c][8c], the most important river of The Empire. Reikland is located between Wissenland to the south, while Stirland and Talabecland lie in the the east. To the north are Middenland and The Wasteland. The Grey Mountains are Reikland's western border, forming a natural buffer zone between The Empire and Bretonnia.

The current Emperor of The Empire, Karl Franz, is also Elector Count of Reikland[6d][8d].

The province has a relatively large population and it is crossed by important trade routes; one crosses the Grey Mountains through Axe Bite Pass, connecting The Empire with Bretonnia. Another trade route uses the river Reik; several ships carry their cargoes between the cities and towns of The Empire and Marienburg. All this trade and the accompanying tools and taxes make Reikland a wealthy and cosmopolitan province. 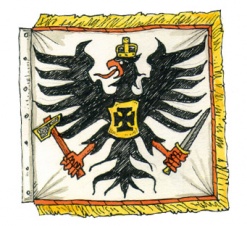 The banner of Reikland.

The main color of Reikland is white. However, most uniforms are actually more of an off-white color. The banner of Reikland depicts an eagle, representing Myrmidia, a goddess of war. In is left talon is a hammer, representing devotion to Sigmar. In its right is a sword, represting the Runefang of Reikland. Atop its head is a crown, representing the ruling emperor. Finally, the imperial cross on the eagle's shield represents imperial unity.[2][5d]

At the siege of Carroburg in 1865 IC the Greatswords of the city held the breach in the city walls for a full day against the army of Middenland. [5d]

In 2211 IC the Dwarfs of the Grey Mountains damned several rivers in a dispute over mining rights which thenh to the Runtwater march by peasents on Altdorf. Since that day, the Empire has been careful not to antognise the Dwarfs. [1a]

All the provinces have their own deities and godings, some of the most important in Reikland are:[11a] Bögenauer (river Bögen}, Borchbach (rhetoric), Clio (history), Dyrath (women), Grandfather Reik (river reik), Katya (disarming beauty)[11b]