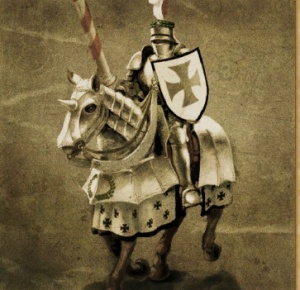 A Knight of the Reiksgard.

The Reiksguard (a.k.a. Reiksgard or Imperial Guard) is a Knightly Order which forms the personal army and bodyguard of the Emperor and the core and backbone of the Imperial army.

The Reiksguard form an elite core of highly trained, expensively-equipped troops who are loyal to the Emperor in person, and alongside the mighty Knights of the Blazing Sun and Knights of the White Wolf, are among his best troops. In battle they usually form up in the centre around the Emperor himself.

They accompany the Emperor on all occasions in war and peace, forming his personal bodyguard on campaign and battlefield and in the course of his diplomatic tours throughout the Empire, and they have sworn to give their lives to protect the Emperor. In times of war, they take the field along with the Emperor, forming an elite unit at the core of the Imperial armies. They are also responsible for the security of all palaces and castles belonging to the Imperial family.

Although the infantry arm lacks the glamorous image of their cavalry counterparts, they are nonetheless a crack fighting force. They are based near the Emperor's palace and can be seen parading through the streets, escorting the Emperor on state occasions, and patrolling the city walls.

Reiksguard are recruited from all over the Empire from amongst the sons of knights and nobility. The ranks of the Reiksguard are open to all young men of noble birth regardless of where they live within the Empire. The sons of Elector Counts as well as members of the Imperial Family often join the Reiksguard. New Reiskguard are inducted yearly at an annual event in Altdorf during the Spring festivals at the conclussion of the Emperors tournament. [3a]

Individual squadrons of Reiksguard Knights are commanded by noblemen, and are generally recruited from their home provinces. A commission in the Reiksguard is regarded as a fine and fitting occupation for the younger sons of the Empire's noble houses, and many of them take this as an opportunity to outshine their elder brothers, who command the armies and militias of their home provinces. There is a great rivalry between the cavalry squadrons of various nobles.

The Reiksguard wear magnificent gilded armour, highly polished to a mirror-like finish, garlanded with scarlet sashes and emblazoned with the device of the Reiksguard. Their helms are adorned with tall feathered red and white crests of the ruling Emperor, or extravagant crests elaborated of the family crest of the squadron’s commander, varying widely from squadron to squadron. All ranks carry shields emblazoned with a skull and the initials of the current Emperor. The knights carry tall lances with pennants decorated with crowns, and ride fierce and prancing stallions. It is common and popular to sport mottoes painted on armour (either the knight’s armour or shield, or the steed’s barding). Examples of such mottoes include Malleus ("hammer"), Sigmar, Desporandum, Victorium and Mortis, amongst many others.

The Reiksguard flag bears the national emblem on one side and the Emperor’s emblem and the Sigmarite legend on the other.

The Reiksguard foot regiments are protected by shields and ornate but heavy steel full armour resplendent with plumes and ribbons and kept polished to a mirror-like finish. They are armed with heavy swords, halberds or great two-handed swords.

In 3rd Edition they are called Reiksgard. [2a]