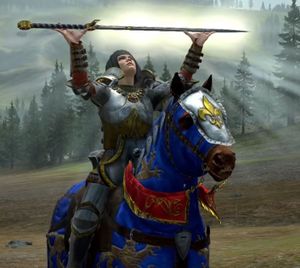 Repanse de Lyonesse was famous a Bretonnian Paladin, later becoming a Bretonnian Lord and duchess of Lyonesse. She was known as the "Damoiselle de Guerre".

She was born in 1990 IC and grew up as a humble shepherdess in Lyonesse. In 2007 IC, Chaos raiders invaded, slayed king Louis the Brave and burned the seventeen-year old Repanses village to the ground. The Lady of the Lake in a vision, telling her to get rid of the invading forces. The Lady led Repanse to the village grail chapel where Repanse took up an ancient sword and a tapestry with the Fleur de Lys from the wall to use as a banner.

The young woman rode forth to rally the scattered and disheartened Knights of Lyonesse. When the retreating knights saw a mere damsel bravely setting off to do battle with the mighty warriors of Chaos, and one who was undoubtedly favoured by the Lady of the Lake, they were shamed and felt honour bound to follow her to death or glory. While the ramparts of Couronne were cracking under the impact of the battering rams of the Chaos Lord, word was brought of a new Bretonnian army approaching fast and trampling beneath their hooves any foe in their path. As the great doors were about to give way, the banner of the dreaded Damoiselle appeared leading a great host of Knights arrayed in a single lancehead formation. They clef their way through the Chaos ranks shattering the Chaos Army until Repanse was face to face with the Chaos Lord himself. When he raised his great sword above his grimacing visage he was momentarily dazzled by Repanse's radiant aura, and she beheaded him with a single sword stroke. Couronne was saved and the remnants of the enemy were pursued to the sea and justly put to death. In gratitude, King Louis the Young bestowed upon Repanse not only all the honours of knighthood but also the Dukedom of Lyonesse.

Repanse was a skilled warrior, blessed with a halo of light that inspired her allies and blinded her enemies. She was known for killing a Chaos Lord with one stroke of her sword, decapitating the massive warrior as he stood dazzled in her presence.

The Sword of Lyonesse was a mighty relic warblade - the sword of a devout and honorable knight of olden times. Led to the sword by the Lady herself, Repanse found it in a mystical Grail Chapel, she had been guided well for the sword had great power over enemy magic. Protecting the Paladin from the greatest of spells.

The Fleur de Lys Banner was a powerful artefact, taken from the same chapel as the Sword of Lyonesse. Draped around her mighty lance it could redirect an enemys spell back at them, obliterating any who tried to stop the Lyonesse.