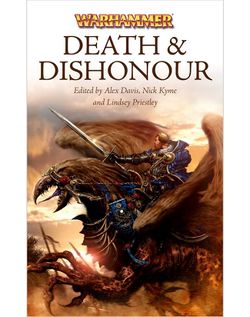 Death & Dishonour is an anthology of short stories published by Black Library and set in the Old World.

Accompanying a merchant's caravan from Araby returning to the Empire after many years, Gotrek and Felix encounter a snowed-in mountain village plagued by a monster.

Calard's Grail Quest is interrupted by a self-imposed mission to free a village from the attacks of a Wyvern, which seems to reincarnate after each defeat.

The Miracle at Berlau

Warrior Priest Jakob Wolff returns to the ruin of his hometown, searching for the Witch Hunter who condemned Wolff's parents to death.

Florin and Lorenzo, selling grain to a starving Imperial town whose stores are being poisoned by Skaven agents, get drawn into a feud between an elderly noble and a greedy merchant, feuding for the position of the town's Provost Marshal, and the hand of a certain irresistible lady.

The Last Ride of Heiner Rothstein

The Judgement of Crows

A wizard of the Amethyst Order travels to a small Imperial village under siege from a plague of the undead.