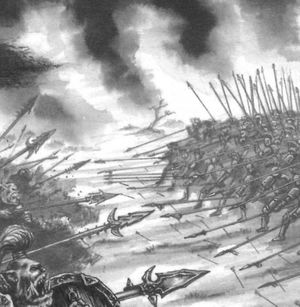 Ricco's Republican Guard are a renowned regiment of Mercenary Pikemen. [1a]

The guard was first raised by a group of merchants in Remas overthrowing the tryant Omilo Mondo, parading his head on one of their pikes. The victory was followed by much drunken celebration. During the revolt several captains of the Guard had died in quick succession until a common soldier - Ragged Ricco assumed command. When victory was achieved, the men were proud of their bloodstained, torn uniforms which showed what tough fighters they were. [2a]

The new Republic was unable to pay them, so they sought work elsewhere - gaining a formidable reputation partly due to them threatening to mutiny if they did not receive additional pay. Young men flocked to their banners - mostly brawny peasent lads fed up with working the fields as the Guard stomped up and down the length of Tilea. Finalyl the Council of remas summoned them back to demand a portion of their hard earned loot. [2a]

After trying to sneak several waggons of treasure out of the city, Ricco was arrested and sentanced to death - however his Guard were not ready to see their commander being cut to pieces and promptly broke him out of prison. They then marched out of the city heading for Sartosa, with ladies weeping and flinging scarfs and handkerchiefs to be worn as tokens. [2a]

Ricco's Republican Guard. The Price of Freedom! [2a]

The Guard can be hired by any army except Bretonnia. [1a]

In 5th Edition any army could hire the Guard.