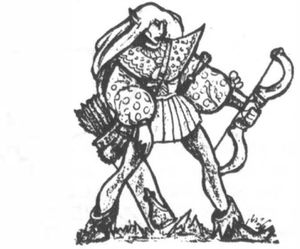 Riolta Snow is a Sea Elf Tournament Archer and adventuer. [1a]

Slender, tall and extremely attractive. [1a]

She has become a renowned tournament archer in Ulthuan becoming extremely rich and winning titles in several kingdoms. [1a]

Enjoying her wealth, she took a holiday in Lustria, even visiting the lands of the Amazon Sisterhood, including Rigg's Shrine and Genaina. She then hired the river boat of Sven Hasselfriesian, the Voltsvagn to go on a hunting safari, shooting amongst other things several Crocodiles and a Giant Turtle. [1a]

Getting ready to head home to Lothern, she was staying at the Packet Inn in the port of Iquitos when Sven persuaded her to join his expedition to save the village of Vastervik from Slann raiders after he lies about the number of potential enemies and claiming it will be a great adventure. [1a]

Taking a Grand Tour of the Old World, she was staying in the village of Frugelhofen when it was attacked by the newly arisen Heinrich Kemmler, the Lichemaster. [2a]

She can be irritating to those she encounters, calling people cutey, places quaint and referring to anything she does not like as gauche. [2a]