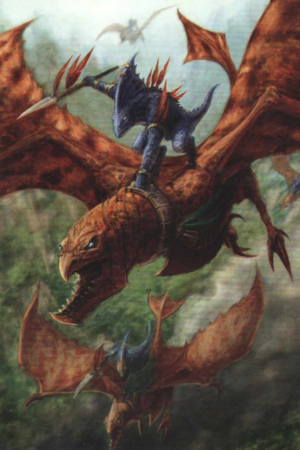 Ripperdactyl Riders are amongst the greatest and most fearsome aerial warriors to ever soar across the skies of tropical Lustria.

Though Skinks found training Terradons relatively easy, turning Ripperdactyls into sky mounts proved far more difficult. While sustaining many losses, Skinks learned that hatched Ripperdactyls could not be trained. Even stolen eggs were problematic, as upon cracking its shell, the claw-winged creature inside attacked the first thing it saw. If the Skink survived, there was a chance the beast might bond to him, although such things took much time and many scars. After about a year, if the Ripperdactyl had not yet eaten the Skink, it accepted him as its master.[1a]

The Skinks who survive bonding with their Ripperdactyls are bold warriors, the most elite of their small kind. Once mounted atop a Ripperdactyl, they forgo javelins and blowpipes, for the blood-hungry beasts they ride cannot be stopped from plunging down upon foes. Instead, they arm for close combat, donning ceremonial helmets and carrying shields and long spears. Led by their Brave, each Ripperdactyl Rider fights with aggressive skill, but they pale in comparison to their mount. The razor-sharp talons of a Ripperdactyl can decapitate foes — their furious attacks often leaving a ring of strewn innards and lopped-off limbs behind them.[1a]

Although Ripperdactyls are merciless killers, eager to devour anything that moves, there is one foe that they target above all others. The Lustrian blot toad, the largest member of the barking toad family, is a noxious beast, known to invade the cliff-side lairs of Ripperdactyls. Even a single such toad produces an odour almost unendurable to cold-blooded creatures. When gathered in numbers, they release enough foul swamp gas to drive off a hungry Carnosaur. For reasons unknown, the favourite food of blot toads is Ripperdactyl eggs. Naturally, Ripperdactyls seek out such beasts, destroying any they find with extreme prejudice. Skinks have learned that by covertly planting a single such toad upon an enemy unit, the diminutive riders can target who is most likely to bear the brunt of the Ripperdactyls’ screeching fury.[1a]