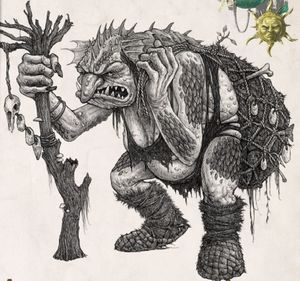 River Troll Hags are huge female River Trolls and the matriarchs of their kind. [1a]

Troll Hags are massive creatures, larger by far than their male kin.[1a]

Cruel and disturbingly clever, Hags only infrequently emerge from the depths of their marshland home to lead their kin on raids but they can also be roused by a Greenskin Waaagh! [1a]

The River Troll Hags practice dark magics, able to curse their foes with strings of Trollish invectives. [1a]