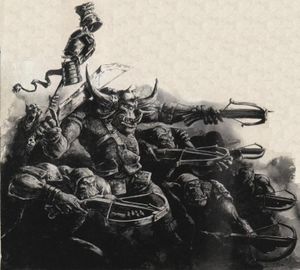 Ruglud's Armoured Orcs are a Orc mercenary band led by Ruglud Bonechewer, fighting for gold and food. [1a]

Ruglud was the Warlord of the Crooked Eye Tribe who had led to many victories, rampaging through the Grey Mountains and the World's Edge Mountains attacking both the towns of the Empire and Dwarf strongholds. However he was defeated by a powerful Chaos Dwarf force, whose deadly volleys slaughtered hundreds of his tribe and easily weathered the inaccurate arrows shot against them. [1a]

The tribe turned on him, although a small band of orcs stayed with him as he fled south until they stumbled on a ruined mountain stronghold where the smallest of the band - Maggot fell into a tunnel leading inside. Although the other Orcs were afraid of entering, Ruglad grabbed Maggot and headed inside where they discovered the remains of a brutal battle between Dwarfs and Chaos Dwarfs. [1a]

Inspired by the recent battle, he decided that using the fallen enemies armour and crossbows would be a great step forward and so Ruglud's Armoured Orcs were born. [1a]

Since then the mercenary band have fought in the Badlands, the Border Princes and in the mountain ranges throughout the Empire and even lords of the Empire have been rumoured to hire them. [1a]

Other than Bretonnians, Dwarfs, High Elves and Wood Elves, any army can hire them. [1a]