A Runefang in Dark Omen. 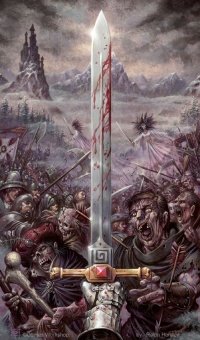 This article is about the swords. For the novel by C.L. Werner, see Runefang (Novel).

The Runefangs are twelve ancient magic swords forged by the legendary Dwarf Runesmith Alaric the Mad.

The swords were intended for the twelve tribal leaders who had followed Sigmar. Today they are the badges of office of the Elector Counts of The Empire.

While there are twelve Runefangs, there are now only ten Elector Counts and provinces that remain. The realm of Drakwald (located in the Drakwald Forest) was destroyed at a currently unknown date, and Solland, the southernmost province, was sacked and destroyed in the early 1700s by Waaagh! Gorbad. The Elector was killed, and Gorbad Ironclaw claimed his Runefang as a trophy.

It was recovered at another unknown point in the Worlds Edge Mountains and returned to the Imperial capital in Altdorf, where it placed in the Imperial Armoury along with the Drakwald Runefang. However, it was at some point given to the Reikmarshal Kurt Helborg to wield instead.