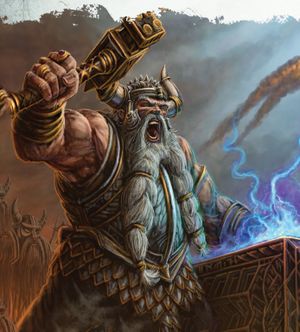 Runesmiths are the closest thing Dwarfs have to magic users in their culture. Runesmiths learn the ancient crafts of working metal and magic into Runes of power.

The oldest and most respected of them are the Runemasters or Runelords.[1a]

The Runesmiths are members of the Guild of Runesmiths, which is said to have its origins in the days of the Ancestor God Grungni. The Guild claims descent from his son Morgrim, and it is for this reason they sometimes refer to themselves as the "Clan of Morgrim", though they are not the only clan who claim descent from the mighty god.[2a]

All Runesmiths are kin, although the relation is often somewhat remote. Each family hands down its craft through the generations. When a Runesmith feels that the time is right, he will take one of his young relatives as an apprentice, teaching him all he knows about the art of Rune making. However, Runesmiths are so protective of their knowledge that many of them fail to find a worthy successor, and end up taking their art with them to the grave.[2a]

The Guild of Runesmiths has great respect in their society. At the very least a Runesmith will have endured hundreds of years of harsh tutelage from their masters, and older Runemsiths will have centuries of runecraft and gathering of lost secrets reflected in the length of their beards and their tough, cantankerous demeanor.

Runesmiths are able to earth and disperse enemy spells before they can cause harm, cpaturing the power in the same way as they draw in the Winds of Magic to create Rune items. They also radiate power, enhancing the power of their own and nearby allies weapons. [2a]