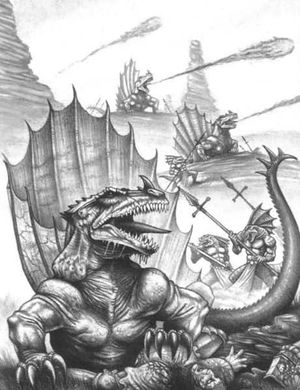 Salamanders are large, amphibious predators who lurk in the jungles of Lustria and the Southlands, especially the Dragon Isles. [1a]

They are great hunters, on both land and water. They have a unique means of catching their prey: they close the distance whilst still hidden in the water before spitting a burst of corrosive, flammable liquid from their gullet that burns and incapacitates their prey, before devouring them with their powerful jaws. This liquid is produced from a special organ inside their bodies, and is also used to fend off attackers. [1a][2a]

Salamanders also have a large sail on their backs, probably to prevent their bodies from overheating while they are using their fiery liquid. [1a]

They are vicious and quite temperamental, but despite this, some brave Skink handlers are capable of capturing them and using them to hunt down greater beasts. Sometimes, the Skinks will use these beasts in war, where the Salamanders' corrosive liquid and bad temperament has been shown to be the end of many enemies of the Lizardmen and their Slann masters. [2a]

They played a pivotal role in the destruction of the Black Ark, Umbral Tide as the salamanders destroyed the defence towers of the vast ship allowing the Lizardmen to swarm onto it. [4a]