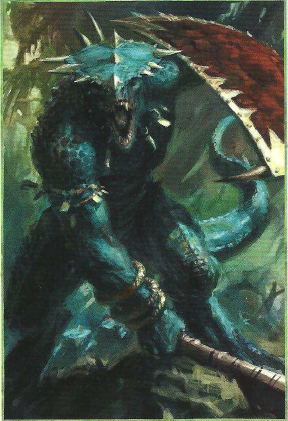 The Saurus are the warrior-caste of the Lizardmen. They were spawned by the Old Ones to act as the soldiers and guardians of their race.[1b]

Saurus are large, blue, reptilian warriors. They are over eight feet in length from head to the tips of their tails, and are covered in thick scales which act as armour. They have large jaws filled with razor-sharp teeth and have large talons that allow them to maul an opponent and are powerful enough to break a mans arm. Bony crests protect their neck and heads whilst tough, thick scales armour their arms and back. [4a]

Saurus can live for thousands of years, and may well be immortal: it has never been known for a Saurus to die of old age, they always die in battle. Like all Lizardmen, the Saurus possess a cold, alien intelligence and are essentially without mercy. Their single-minded focus on warfare and training should not be mistaken for stupidity.

The Saurus have an instinctive grasp of warfare, and their bestial appearance belies their ability to enact perfectly timed manoeuvres - however, they can be quite savage in combat, raining multiple attacks on their unfortunate opponents in quick succession.[3] It sometimes requires a nearby Skink leader to restrain Saurus from pursuing targets to the detriment of their army's goals.

It is not clear if the Saurus were created on the world or brought with them but it is possible they already dwelt in the primaeval jungles when they arrived. They provided the Old Ones with soldiers to guard their cities. [1a]

When the Old Ones first created the Saurus they were tasked with eradicating the races that did not form a part of the Great Plan and have wiped out entire species in this quest. However, despite many campaigns, the Saurus were never able to completely eradicate the Greenskins.

Like all Lizardmen, Saurus are spawned fully formed from the Spawning Pools under a Temple-City. They emerge wet and dripping from the pools but within hours they will dry and their scales begin to harden, forming protective armour. A group of Saurus who spawned together will often fight together as one unit.

Some spawnings produce specific abilities or traits in the Saurus and are regarded as blessings from the gods. Recently Saurus have been spawned that instinctively know how to control and ride the Cold Ones - regarded as a blessing of Tzunki. [4a]

Most Saurus fight in large infantry blocks of Saurus Warriors. Those spawned with especially tough hides serve as Temple Guard, given sacred armour and designated to protect the Slann. Some Saurus are spawned with the instinctual ability to tame and ride Cold Ones into battle. These are referred to as Cold One Riders. [4a]

Lastly, those grizzled old Saurus who have survived many campaigns are known as Scar-Veterans and Oldbloods. [4a] They serve as war-leaders and command the armies of the Lizardmen, often riding Carnosaurs.

In older editions of the tabletop game, Saurus could take special bonuses called "Sacred Spawnings" or Blessed Spawnings[1], representing a spawning of Saurus who had been blessed by a particular Old One, and typically had a particular colouration on their scales.